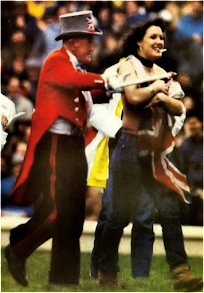 Ken Baily was the England football and rugby cheerleader for three decades and Bournemouth Football Club mascot from the 1950s.

An eccentric character and lifelong bachelor, he had a love of trifle and in his spare time could be seen riding his bicycle around the town dressed as either Winston Churchill or the Emperor of Ethiopia, Haile Selassie. As a cheerleader, he was recognisable in his trademark costume of Union Jack waistcoat, scarlet tails, white gloves and top hat. When meeting royalty, Prince Charles is said to have once remarked ‘where did you escape from?’ He is also the only man to become both a Freeman of Bournemouth and a Subbuteo figure.

Ken Baily was a keen runner and swimmer and maintained his fitness by regular sea bathing. This included regular dips in the Bournemouth briny on Christmas Day and on New Year’s Eve. He worked as a clerical assistant in a Bournemouth telephone exchange and also wrote a gossip column for a local newspaper using the pen name Genevieve. He was able to finance his cheerleader travelling after the receipt of an inheritance. In 1937, he had run from Bournemouth to Paris in 36 hours. Baily ran the 32 miles to Southampton where he boarded an ocean liner for Cherbourg. Throughout the crossing, he kept running around the deck. Then he ran the 213 miles onto Paris. Asked why he had done this, he replied ‘just to prove it could be done.’

In 1939, he ran non-stop across the Atlantic Ocean on the deck of the SS Bremen as a member of a four man team. They carried a message to US President Roosevelt requesting his support should war break out between Britain and Germany. In 1948, he was one of the torchbearers at the London Olympics. Ken Baily would regularly join up with carnival processions across Dorset and one year he dressed up as a Rubik’s cube.

In 1982, he tried to cover up the ample cleavage of streaker, Erica Roe with a union jack when she ran topless across the Twickenham rugby pitch. He was an ardent royalist and would follow the queen around the country to be present at formal engagements. In support of the England football team, it is reckoned he travelled almost 200,000 miles and visited 40 countries.

Ken Henry Baily was born in Burnham on Sea in Somerset on the 8th August 1911 and died in a Bournemouth nursing home on the 10th December 1993.