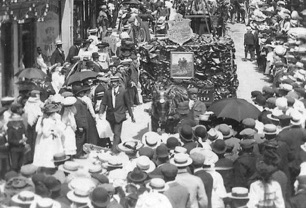 Blandford, or Blandford Forum, is a country town in southern England in the county of Dorset. From the time of the Norman conquests, in the 11th century, to the present day it has enjoyed a long and rich history. Nearly 400 years after a visit from King John, King James I granted the town in 1605 a Charter of Incorporation. Later, King Charles I was to read the lesson in Blandford Church.

In 1731, the Great Fire of Blandford destroyed most of the town. Donations were received from all over the country for its rebuilding. This reconstruction was masterminded by the Bastard bothers which gave the town its distinguished present day Georgian style. In the past, the town gained a reputation for the making of perukes (gentlemen’s wigs), fine lace and Blandford buttons. Now it is better known for the brewing of Blandford Badger Beers. Back in 1790, there were 21 inns in the town but sadly there are far fewer now. The year 1831 witnessed two men being condemned to death for their involvement in the Blandford Riots. However, following widespread protests, they were reprieved. In 1863, Blandford Station opened and that year, the Town Band won the National Brass Band Championship. Later, the town had its popular Mouth-Organ Band. From 1859 to 1895, controversial editor James Bartlett published the local newspaper, the Blandford Express after which this website is named.  In 1906, the town celebrated its Tercentenary when 1,600 locals enjoyed a free tea in Bryanston Lower Park, the latter being made available by Lord Portman.

Nearby, is Blandford Down, now Blandford Camp, where the Blandford Horse Races were held annually.. This became a major social event with attendees including the local gentry, Lord Palmerston and the Duke of Wellington. Barbaric sports such as cudgel and cock fighting were regular events. Blandford Military Camp opened in 1914 and was occupied by the Royal Naval Division and then the Royal Air Force. Both King George V and Winston Churchill visited the Camp in 1915. Three years later, Blandford born Jack Counter was awarded the Victoria Cross for bravery. During the Second World War the Camp was reopened by the British Army. Towards the end of the War and in preparation for the 1944 Normandy Landings, a large United States military hospital was constructed there.

Around Blandford, there are many attractive villages such as Pimperne, Shapwick and Stourpaine. Pimperne once had a distinctive Maze, Shapwick its infamous Monster while Stourpaine was reckoned to be, in the 19th century, one of England’s poorest villages. Among the local gentry, the Portman family lived in the nearby village of Bryanston for many years. The family owned valuable real estate in Central London while Emma Portman was a close confidante to Queen Victoria.

Such is the varied history of this North Dorset town.

Tarrant Rushton was a large RAF base used for glider operations during World War II. It was then taken over by Flight Refuelling for the conversion of aircraft for the development of aircraft in-flight refuelling. However, between 1958 & 1965, the Tarrant Rushton airfield had a much more secretive and less publicised role. This was in support of the nation’s nuclear bomber deterrent, as Tarrant Rushton airfield became a QRA (Quick Reaction Alert) dispersal unit.   During 1958, contractors Costain reinforced the main runway and carried out other work to ensure the giant bomber aircraft could be accommodated. At times just a few miles from Blandford, there would have been up to four RAF Vickers Valiant bombers at Tarrant Rushton ready to become airborne in minutes charged with nuclear weapons. The bombers were from 148 Squadron at RAF Marham in Norfolk. As there was no suitable accommodation at the airfield, an old US Air Force Hospital building at Martin was used. At the time, the
3 comments
Read more

On a Tuesday in October 1706, a travelling Poole fishmonger was wheeling his cart on the outskirts of the village of Shapwick. Unknown to him, a large crab fell from his barrow. This was to cause panic and alarm among the Shapwick villagers. Living inland, and perhaps in the 18 th century not having travelled beyond Blandford, the Shapwick villagers had never before seen a crab. Trudging home and exhausted by his day’s labour, a Shapwick farm worker discovered this crawling creature by stepping on it. So strange was its appearance, he believed it was the devil himself. Running on to the village, he told everyone excitingly of his horrid find. Fearing it was the work of the devil, the villagers armed themselves with pitchforks, sticks and stones. Knowing not what to do, they decided to consult the shepherd Rowe considered by many to be the local wise man. Sadly, the aging oracle was now past his prime and for the last six years had been confined to his bed. The old man was as infirm as
Post a Comment
Read more

It might not have been Ascot, Epsom or Aintree but Blandford Races was once quite an important event in the county’s social calendar. Blandford Races date back to 1603 and were held on the downs which today would be part of Blandford Camp. Meetings continued until the middle of the 19 th  century with few breaks in between. The longest interruption was when Oliver Cromwell was Head of State and Government. As Lord Protector he was not amused by such events. Apart from horse racing, there were other entertainments. These included wrestling matches, cock fighting and dancing. Much feasting took place which was highly lucrative for the town. In 1780, cudgel playing was advertised and resulted in a Shaftebury man losing his left eye. This was then replaced by a sword and dagger contest between the gentlemen of Dorset and Somerset. One of the race patrons was Lord Palmerston who was later to be Prime Minister. In 1824, he had had a winner, Luzborough in the Dorsetshire Gold Cup. Normally he
2 comments
Read more