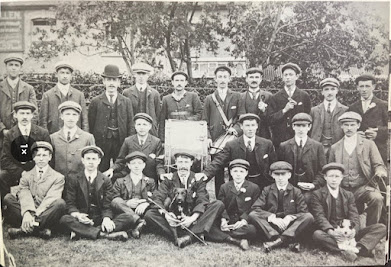 In 1900, there were 20 public houses, 10 butchers, 8 grocers and 5 greengrocers in the town. Local born athlete and railwayman, Charles Bennett, known as the ‘Shapwick Express’ celebrated winning his gold medal in the Paris Olympics by visiting the Folies Bergere night club. When the River Stour burst its banks, shops in West Street were flooded and guests in the Crown Hotel had to make their exits by way of a ladder from the hotel’s first floor. Two old fire-fighting machines belonging to the town’s Volunteer Fire Brigade were put up for sale but there were no takers. Hector’s Brewery on the banks of the River Stour, and acquired by Hall & Woodhouse in 1882 was destroyed by fire.

In 1901, following the news of the death of Queen Victoria, a day of mourning was declared in Blandford and all business was suspended. ‘VR’ and ‘RIP’ were displayed in bold white letters in front of the Town Hall. A large procession assembled and marched to the church where a service was held with many in the congregation unable to find seating. A four and a half feet wreath was sent to Windsor which read, ‘In memory of our beloved Queen Victoria from the loyal mothers and daughters of Blandford Forum. January 31st 1901.’

In 1902, Blandford born George Vince died in an accident in Antarctica when serving in an expedition led by Captain Robert Falcon Scott. A wooden cross was erected by the members of the expedition in his memory and it continues to be maintained by the nearby US and New Zealand Antarctic bases. A procession marched down Salisbury Street to welcome back the Blandford volunteers that had fought in the Boer War.

In 1904, a traction engine crashed and turned over on Stickland Hill.

In 1905, led by volunteer fireman Jack New, Blandford’s Mouth Organ Band was extremely popular. Their presence was frequently requested to play at concerts and social events across the county. A fire broke out in a Spetisbury bakery and at one time the heat was so fierce that one half of the village was cut off from the other. Fire engines from Wimborne and Blandford attended the fire.