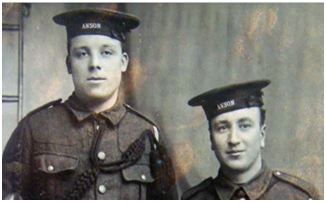 Twenty-year-old Scottish seaman, Robert Banks (right) from Greenock arrived at Blandford Station in December 1914. The young recruit slowly made his way up the muddy unmade track connecting the town with the newly opened Blandford Naval Camp. Upon the outbreak of World War I, he had volunteered with thousands of others to join the Royal Navy. This meant leaving his marine engineering job in Glasgow’s River Clyde shipyards. Robert Banks was joining the Anson Battalion of the newly formed Royal Naval Division. Another recruit was his long standing pal, Henry Short (left) who was a trumpeter.

As a break from training, the Mayor of Lyme Regis, Alban Woodruffe invited the Battalion to spend time at the seaside in early February 1915. Local resident, Mrs Emmett invited Robert to stay with her. Before leaving Lyme Regis, the Mayor gave the Battalion this message: ‘We hope you will take away pleasant memories of your short visit here and we wish you God-speed and all good luck.’ Upon returning to Blandford, Robert and Henry were told to prepare to travel overseas. So Robert sent a postcard to his seaside landlady. He explained they were about to leave Blandford but did not know their destination. Blandford Camp’s Royal Naval Division, including the Anson Battalion, was sent to Gallipoli which became a military disaster. Robert Banks was killed and has no known grave. His pal, Henry John Short died of his wounds on 6 June 1915, the same day it is believed Robert Banks was killed.

Before his death, Robert wrote a poem which arrived at his mother’s home after she had been told he had died.

Based on research by Vernon Rattenbury & website 1914-18 Inverclyde's Great War.