Easter Past & a Local Rail Crash 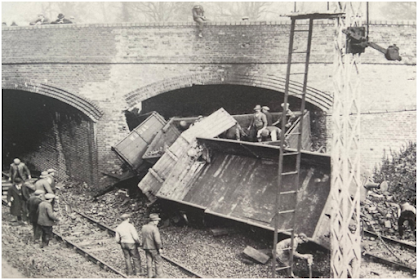 If you were looking to get away at Easter in 1929, there were plenty of cheap railway excursion tickets on offer from Blandford Station.

For six shillings (30p) you could buy a cheap day return to Lyme Regis or Seaton while for just two shillings (10p) you could spend a day in Bournemouth or go to the Steeplechase Meeting at Wincanton. On Easter Monday, you could travel to Yeovil and watch the home team take on Bath City in football’s Southern League at the Huish Park. (Yeovil won 3-1)

Following Saturday, the Southern Railway Company was running a football special to London to watch Bournemouth & Boscombe Athletic play Crystal Palace at Selhurst in a Third Division (South) match. Claiming, ‘it’s quicker by rail’, and leaving Bournemouth Central at 10.00am, the return fare to Selhurst was six shillings & sixpence (32p). The football special was advertised to have both corridors and a restaurant car. For those wanting to spend more time in the capital, there was a late returning train which left London Waterloo Station at 11.55pm.

Travelling by train at the time was not without its hazards. A couple of weeks earlier there had been a train crash near Blandford when six trucks became decoupled and derailed crashing into a Blandford/Bournemouth main road bridge. Fortunately, no-one was injured. A more serious accident was prevented by an approaching passenger train being just stopped in time. Day trippers from Stourpaine & Durweston Halt were able to take advantage of a new ‘substantially-built shelter for the convenience of passengers.’ Local newspaper the Western Gazette reported, ’this will be found to be a great boon particularly in winter months on account of the halt standing on an exposed embankment.’

Alternatively, those staying in Blandford could have gone to the Palace Cinema in East Street where the film ‘A Little Bit of Fluff’ was showing. It starred Syd Chaplin, Charlie Chaplin’s half-brother and actress, Betty Balfour. Now forgotten she had just been described as the country’s most popular film star.