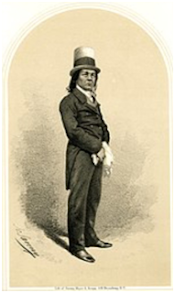 In 1863, Blandford railway station opened on 21st September when a line that previously ended in Blandford St Mary was brought into the town.

Led by the owner of the Crown Hotel, Robert Eyers the Blandford Town Band won the National Brass Band Championship held at the Crystal Palace. There were four Hunt brothers in the Band. On returning to Blandford, they were met by the Rifle Volunteers and marched around the town amidst cheering crowds.

After the railway station was opened, seven new inns were built in the town.

In 1864, music hall star in the USA and Britain, Samuel Cowell died in his East Street lodgings and was buried in Blandford Cemetery. He had twice performed before Queen Victoria at Windsor and also before the US President yet died a bankrupt. A charity concert was organised to raise money to pay for his gravestone. A horse drawn coach from the Crown Hotel met every train arriving at Blandford railway station.

In 1865, Mary Ann Smith was matron of the County of Dorset Female Penitentiary located at 77 Salisbury Street.

In 1868, workhouse master, Robert Morgan resigned after he was charged with drunkenness, false accounting and stock deficiencies.

In 1870, Charles Bennett was born in Shapwick. Known as the ‘Shapwick Express', the railway worker was the first British track and field athlete to win an Olympic medal. Chief Medical Officer reported 60 wells in the town had undrinkable water.

In 1871, local newspaper, the Blandford Express Christmas edition cost one penny. It had advertisements for Holloway’s ointment, a professed cure for all ailments, Borwick’s Baking Powder, ideal for pies & puddings, and Peruvian bird droppings fertiliser. Parish of Blandford had a population of 3,900 accommodated in 731 houses.

In 1873, early trade union leader, Joseph Arch spoke at a meeting of the National Agricultural Labourers’ Union held in the Corn Exchange.

A train travelling at 50m.p.h. approaching Stourpaine, hit some heifers that had wandered onto the line because of a broken fence. One of the heifers was cut to pieces while a second was knocked sideways by the locomotive  Blandford Church bells were rung to celebrate local landowner, Lord Portman being made a Viscount by Queen Victoria.