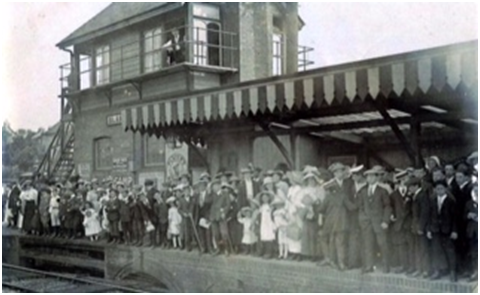 Blandford railway station opened in 1863 when a line that previously had ended at Blandford St Mary was brought into the town. After just over 100 years of service Blandford station was closed to passengers in March 1966 and soon after for goods traffic. Blandford station is remembered by songwriters, Flanders & Swann in their eulogy to the many quaintly named stations closed by the notorious Dr Beeching’s axe.

Slow Train
'No more will I go to Blandford Forum and Mortehoe,
On the slow train to Midsomer Norton and Mumby Row.
No churns, no porters, no cat on a seat
At Chorlton-cum-Hardy and Chester-le-Street.
We won't be meeting again on the slow train.'
Blandford Station was one of the largest stations on the Somerset & Dorset line and was brick built with canopies on both platforms. These platforms were connected by a subway. There was also a goods yard, a corn store, landing docks and a seven ton crane.

First station to the north of the town on a single track was Stourpaine & Durweston Halt. When the first train stopped, the 8.06am to Blandford on 9 July 1928, almost the entire population of the two villages was there to greet it. First station to the south was Charlton Marshall Halt.

Towards the end of World War I, a small branch line was built between the town and Blandford Camp where over 20,000 servicemen were stationed. The line had a short life as the railway no longer had a purpose when a decision was taken to close the Camp. When recovering materials in July 1924, there was an unfortunate incident. Trolleys were being loaded with rails and other materials when for some unexplained reason they began to roll forward downhill towards Blandford. Across the main line was a gate into which the heavily loaded trolleys crashed at great speed. One by one they tumbled down the embankment to be completely smashed. It was not always a quiet life at Blandford station.

In its later years, Blandford station and the Somerset & Dorset railway line were starved of investment. As a consequence, the line was not regarded as a model of modernity. With its aged coal-burning steam locomotives, the line was unkindly nicknamed the ‘Slow & Dirty’. However, Blandford could boast a single not so slow train and that was the Pines Express. This was a named passenger train that ran daily between Manchester and Bournemouth between 1927 & 1967. Steam trains had to stop at Blandford to take on water, so the Pines Express did so also. In the 1950s, it was particularly busy bringing holidaying northerners through Dorset to the Bournemouth seaside. Sadly, for the town, the Pines Express was diverted onto another route after September 1962. This, together with other re-routings caused considerable local ill-feelings and led to the demise of the line and Blandford station’s subsequent closure.

Alan Gibson was a radio broadcaster, a sort of forerunner of the modern DJ, who had his own Saturday morning radio show. Broadcast in the early 1960s, it was called, ‘Good Morning.’ This was a show of record requests, terrible jokes and unscripted banter with co-host Derek Jones. With an impish sense of humour and a generous eye for unusual characters, Alan made frequent affectionate jests about the sleepy inefficiencies of Blandford station. On a couple of occasions, they even broadcast their show from the station booking office. Alan Gibson was also a talented sports journalist and Test Match Special radio commentator. Unfortunately, Alan Gibson loved a drink too much and it is said could broadcast with a glass of spirits disguised as half a pint of beer. Sadly, this weakness was to end his cricket commentating career.

Blandford station became a housing development and in 1978, the East Street railway arches were demolished by dynamite. Whether as the ‘Swift & Delightful’ or the ‘Slow & Dirty’, Blandford station and the Somerset & Dorset Railway are still fondly remembered.