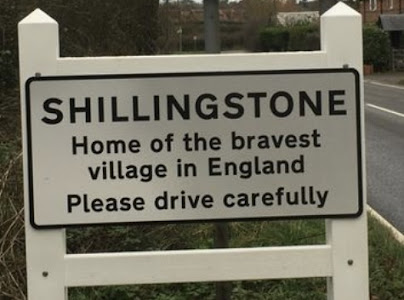 A Dorset village was once recognised as the bravest in England. That village was Shillingstone in North Dorset.

After the outbreak of World War I, the newspaper the Weekly Dispatch inaugurated a competition for the village that sent, in the first six months of the war, the highest percentage of its population into the British Services. According to local newspaper, the Western Gazette Shillingstone sent 90 men out of a total population of 565. (Western Gazette Friday 26th September 1919) Across the country,  365 other villages sent in their returns. However, the competition would not prove to be short of controversy.

The award was made to Knowlton in Kent which with 39 inhabitants and six houses had sent 11 men. However, the Rector of Shillingstone, Dr Cooke protested that Knowlton was too small to be a village and in fact was a hamlet. The matter was referred to the Attorney General, Sir Frederick Smith who held that the original decision should stand as no minimum population had been stated in the competition.

Some time elapsed and then the Weekly Dispatch wrote to the Rector of Shillingstone enclosing a cheque for 25 guineas towards a memorial of Shillingstone’s unique position that the Rector may decide to erect after the end of the war.

Shillingstone had also received a letter from King George V:

‘Message from King George. His Majesty is gratified to learn how splendidly the people of Shillingstone have responded to the call of the Colours. I image this must be a record.’

Shillingstone’s War Memorial was unveiled in September 1919. The village was also presented with a German field gun as a ‘trophy of war’.

A century later, Kent Live revived the controversy when it claimed that few of the Knowlton men actually lived there. They claimed that many were from neighbouring villages. However, as they worked on the Knowlton Estate they had been included in the numbers declared to the Weekly Dispatch.