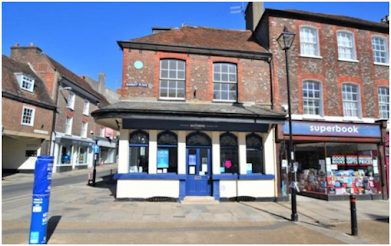 He has his own dedicated memorial plaque and Corner in Blandford but is now almost a forgotten man. His name is Henry Durden and he was the founder of the town’s first museum.

Henry Durden was born in 1807 and in 1859 was listed as a grocer and seller of wines and spirits. The Durdens were a respected Blandford family and they played an active part in the town’s life. There is a Durden listed in a 1791 trade directory as a Blandford grocer. Henry’s father, John was Mayor in 1837. Henry held this role on three occasions while his son, another John, was Mayor in 1893.

In his shop, he opened a highly regarded museum. On display were 60 urns which were over 2,000 years old and all found within eight miles of Blandford. Most exhibits in the museum were from Dorset including prehistoric items from Hod Hill and various local barrows. There were also flint arrowheads, bracelets and coins including a ten shillings piece of Elizabeth I’s reign. So respected were his acquisitions that in the archives of the British Library in London there is a book entitled ‘Catalogue of the Museum of Local Antiquities collected by Mr Durden of Blandford’ (George Payne 1892). Many of the items found at Hod Hill were as a result of ploughing and he would frequently buy items discovered by the locals.

For many years later, the shop was a prime wine & spirits outlet for Hall & Woodhouse/Badger Beers and Stan Smith was the manager. He recalls being told the original shop was much bigger. It included what were Hepworths and Horne & Banfield’s cake shop in Salisbury Street. There was also a large store at the back of Boots the chemist. Above the shop was a flat which is still there today.

Henry Durden was little known outside of his home county until his work was discovered by Charles Roach Smith who was co-founder of the British Archaeological Society. In addition to items from Dorset, Durden acquired artefacts from Ireland, Denmark and the USA. He also purchased some items from Kent.

‘These thoughts have been excited by a very recent visit to the collection of local antiquities made by Mr Henry Durden of Blandford under most favourable circumstances. I had for many years known them and by the kind sanction of Mr Durden had repeatedly drawn attention to and commented on them in my Collectanae Antiqua but more than ever am I now impressed with their surpassing interest.’

Henry Durden died in 1892 with his son, John taking over the grocery business. Over 2,000 of his items were sold by John to the British Museum. He had a large coin collection which was also sold while some other artefacts were sold to the Pitt-Rivers Museum. Appropriately, the blue plaque dedicated to Henry Durden can be found at the corner of Salisbury Street and the Market Place in a place known as Durden’s Corner. 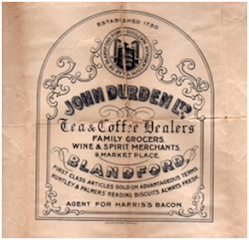