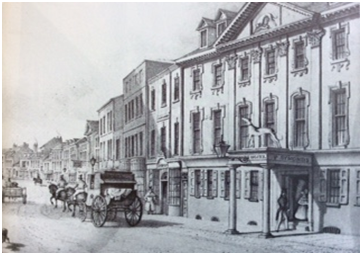 In 1794, it cost five hundred pounds, eleven shillings and six pence (£500.57p)) to install an organ in Blandford Church. A further five shillings (25p) was spent purchasing beer for the men who helped unpack it.

Assembly Rooms in West Street were opened. Concerts were held there particularly during Blandford Races Week.

In 1799, Lady Charlotte of Wales dined in the Greyhound Inn with her lady-in-waiting. Charlotte was 3 years old.

In 1803, beacons were prepared across the country to be lit in the event of an invasion by the French.

In 1804, Monsieur Fialon, formerly of Paris, taught all types of dancing in his Blandford Academy of Dance.

In 1805, James Shatford, manager of the Salisbury Company of Comedians, built a theatre in White Cliff Mill Street.

In 1806, an Admiralty Shutter Telegraph Station was installed near Blandford Racecourse. It was a link in a chain to send messages between the Admiralty in London and Plymouth Naval Dockyard.

In 1807, seven Blandford businesses were engaged in the town’s traditional trade of button making. Buttons made included the Blandford Cartwheel.

In 1808, a public meeting was called to oppose the installation of lighting and paving in the town.

In 1813, Captain of the Dragoons, Peter Hawker home from the Peninsular War with 30 companions, enjoyed a splendid dinner at the Crown Hotel for seven shillings (35p) a head.

In1815, a large workhouse was built in East Street accommodating 250 paupers.