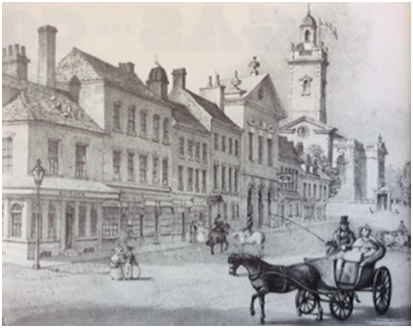 In 1777, a horse drawn coach from Exeter was robbed by a highwayman just a few miles short of Blandford.

In 1778, smugglers firing their pistols attacked the house of the Supervisor of Excise in Blandford and took away 16 cwts of tea and nine casks of liquor.

In 1779, the Greyhound Inn advertised that it had a ‘very good billiard table.’

In 1780, a young boy chimney sweep was burnt to death when cleaning the chimney in a Blandford inn.

In a battle royal between poachers and gamekeepers, Pimperne born poacher trumpet-sergeant Blandford had a hand cut off by a gamekeeper’s cutlass.

Nine hundred & eighty four gallons of spirits seized from smugglers were put up for auction in Blandford.

In 1781, the British Army fought in the Battle of Blandford. However, this skirmish did not take place in Dorset but in Blandford, USA.

Henry Maidment was born in Tarrant Monkton. He was to serve in the Duke of Wellington’s army in the Spanish Peninsular War.

William Moulton was contracted to repair and widen Blandford Bridge for £840.