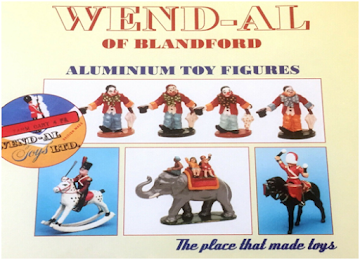 These days most toys seem to be made in China. Yet 70 years ago, some very fine toys were made in Blandford. Wend-al was a Blandford company which was a highly regarded maker of aluminium toy figures.

Edgar Kehoe was its founder. Immediately after World War II he was looking for a business opportunity. Travelling in France, he discovered his opportunity in the town of Luxeuil-les-Bains where a company named Quirala was making die cast aluminium figures. At the time, lead was more commonly used in the manufacture of toy figures. This company, located in the French region of Bourgogne-Franche-Compte, did not use lead but solid aluminium. Quirala was a combination of the company founder’s surname Quirin and the word aluminium. Edgar Kehoe realised that solid aluminium was stronger and lighter than lead and would not break. As a consequence, he struck up a deal to use French moulds and so production began in Blandford in 1946. He opened his factory in the former Blandford Isolation Hospital that had just closed. Within 18 months, the company was employing 50 people and exporting its products across the world.

The company prospered and gained an excellent reputation and this led to them making their own range. These figures were identified by having a paper label on the base. Wend-al products were generally divided into three categories. These were figures, such as toy soldiers, zoo & farm animals and farm vehicles. At the time, use of plastics to make toys was in its infancy. However, in time the company was unable to compete with plastic toy competition so the business sadly closed in 1955. Wend-al toys are still highly sought after by collectors and several can be regularly found for sale on the internet. Recently, a rare 1948 boxed nativity set of Wend-al figures was advertised for sale at £470. While a Wend-al salesman’s wooden sample case was valued at £600. In 2005, author Philip Dean published a hard back book, Wend-al of Blandford. It detailed the history of the company and included many illustrations of its products. That year, Wend-al Toys founder, Edgar Kehoe had celebrated his 100th birthday.

Today, all that remains, located close to where the aluminium figures were made, is the name Wendal Road, Blandford.