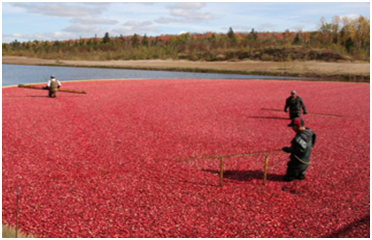 Blandford’s town council has been giving away free land!

To discourage Saint-Louis-de-Blandford’s young and not so young residents from moving away to the city the municipality acquired land which it has been giving away. Applicants have to put down a $1,000  payment and then to commit to build a house worth at least $125,000 within a year. The town then refunds the down payment. Saint-Louis-de-Blandford is well-known for growing excellent cranberries and is regarded as Canada’s capital for this fruit. The town enjoys a proper continental climate of warm summers but the winters are exceedingly cold.

If there was a competition for the countries with the most Blandfords then Canada would win hands down. In addition to Saint-Louis-de-Blandford, famous for its cranberries, there are Blandford in Nova Scotia, Port Blandford in Newfoundland, Blandford-Blenheim in Ontario Province and not forgetting the also French speaking Sainte-Marie-de-Blandford. The USA has only two Blandfords, one in Massachusetts and another in Virginia. However, the latter can at least claim the site of the Battle of Blandford.