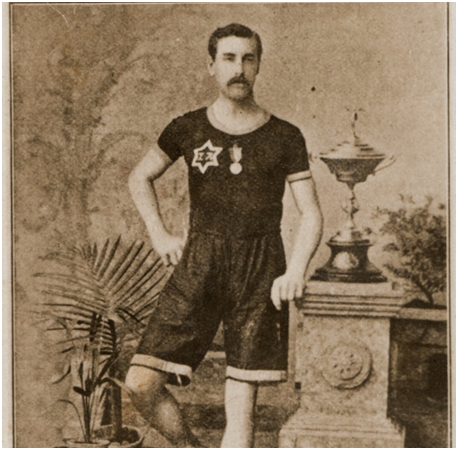 Shapwick’s Charles Bennett was Britain’s first track and field athlete ever to become an Olympic champion. He won two golds and one silver medal at the 1900 Paris Olympics. Nicknamed the Shapwick Express, Charles Bennett was born in the village on 28 December 1870. He became one of the finest middle distance runners of his time.

Charles Bennett won the AAA four mile championship in 1897 and the cross country running title in 1899 and 1900. At the 1900 Paris Olympics, he beat the favourite, Frenchman Henry Deloge to win the gold medal in the 1,500 metres race. His time was a new world record. He then won a second gold medal in the 5,000 metres team race. Charles Bennett just missed an Olympic gold hat-trick by coming second in the 4,000 metres steeplechase. Apparently, he celebrated his victory by visiting the Folies Bergere night club. Despite limited press coverage, when he returned home to England, he was carried shoulder high through the streets of Wimborne.

Charles Bennett was the son of carter, Henry Bennett and his wife, Peggy and he became a train driver. It is said his early career training began by chasing horses across a ploughed field. To build himself up, his diet consisted of just boiled rice and raw eggs. Charles Bennett’s athletic career had begun formally when he joined the Portsmouth Harriers. Driving locomotives between Bournemouth and London, Waterloo enabled him to transfer to Finchley Harriers.

In 1902, he married Sarah Lena Lewis and they had five children. After he married, he decided to hang up his running shoes. He later became a publican of the Dolphin in Kinson, later renamed the Acorn public house.