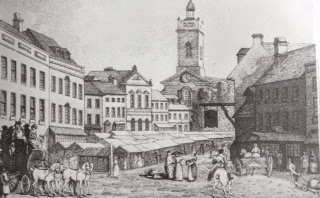 In 1741, two men, Will King and Ben Fluel, were publicly hanged in the Market Place for robbing Lady Grace Haynes.

In 1742, scavengers Robert Pitman and Richard Dutton were paid fifteen shillings (75p) per quarter to sweep the streets and remove the dung and filth.

In 1744, Blandford Races were revived after a lapse of several years.

In 1752, a cudgel contest was held in the Sword & Dagger public house. A two guinea prize was offered ‘to the man that breaks most heads and saves his own.’

In 1753, during this year, eight Blandford girls married soldiers.

In 1755, the famous Damory Oak was felled. It stood 75 feet high and its cavity could hold 20 men. During the Civil War, an old man sold beer in it. Its wood was sold for fourteen pounds.

During Blandford Races, cockerel fighting took place regularly in the White Bear and the Cock Inn.

Eccentric Jonas Hanway, the first man to use an umbrella in London, stayed at the Lion Inn with friends.

In 1756, thirty Blandford men joined the army stationed on Blandford Down and led by Major-General James Wolfe.

A highwayman stole the horse of Oxford clergyman, Reverend Collins as he travelled between Shaftesbury and Blandford. In return he gave the clergyman his old nag enabling the man of the cloth to continue on his way.