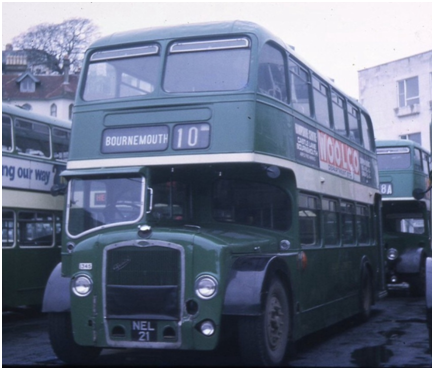 Between Salisbury and Weymouth via Dorchester there was a daily (no.34) hourly service operated jointly by Wilts & Dorset and Weymouth based, Southern National. Blandford’s bus station could be found just south of the Salisbury Road railway bridge and right next to a fish & chips shop.

Hants & Dorset ran two routes to Bournemouth. One from Blandford was via Corfe Mullen (10) while the other (24), originating from Shaftesbury, journeyed via Blandford and Wimborne to Bournemouth. However, the latter took an interminably long time to get to its destination. During Summer Saturdays a second ‘relief bus’ would frequently be added on these popular routes to the seaside. Hants & Dorset had been founded with just four silver painted ‘charabancs’ which were all requisitioned by the military during World War I.