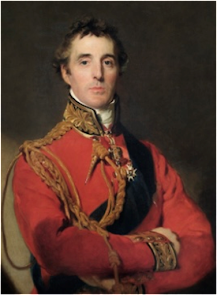 Duke of Wellington was Prime Minister twice and defeated Napoleon Bonaparte in 1815 at the Battle of Waterloo. Reflecting his status, his Apsley House, London home in Hyde Park had the distinguished address of Number One, London. It was therefore quite an event when Arthur Wellesley, 1st Duke of Wellington decided in August 1827 to visit Blandford. Purpose of this visit was to attend Blandford Races held annually on Blandford Down which is now Blandford Camp. These dated back to the early 1600s and by the late 1820s, Blandford Races were at their most prestigious – as famous in that decade as Doncaster or Newmarket.

The Duke of Wellington had arrived at the Races as a guest of the Course Steward, William John Bankes of Kingston Lacy. He had become a friend of Wellesley during the Spanish Peninsular War. Their arrival together was a splendid sight involving eleven carriages pulled by 44 horses driven by coachmen accompanied by splendidly dressed footmen. The two day event was crowded with ‘families of the first distinction’ and included Prince Esterhazy, Lords Westmoreland, Ashley & Beresford and Lords & Ladies Folkestone & Ellenborough. The Salisbury Journal reported:

‘As soon as his Grace was recognised on the Down, cheers resounded from all quarters and he appeared highly gratified with the scene, shaking hands with many who pressed forward for the purpose.’

An old soldier who was selling lists of the horses running was recognised by the Duke and he gave the old man a sovereign for a list. The old man then left well-satisfied with his day’s work. It is reckoned the Duke stayed at the Greyhound Inn while at Blandford as it was the preferred hostelry at that time for those of his Tory political persuasion. Another Prime Minister and Foreign Secretary, Lord Palmerston was a member of Blandford Race Course and witnessed many of his horses win there.

Apart from horse racing, there were other entertainments. These included wrestling matches, cudgel & cock fighting and dancing. With such a large attendance, the gambling booths did fine business. The Duke attended both days’ racing and the two balls held in Blandford. The Sherborne Mercury reckoned one of these balls would always be referred to as the ‘most splendid and delightful that had ever distinguished Blandford Races.’ The band led by Monsieur Collinet had travelled from France ‘for the express purpose of playing their quadrilles at the two balls.’

While at Kingston Lacy, William Bankes invited the Duke to plant a cedar tree which survived until quite recently. The ‘Iron Duke’, as he was nicknamed, then returned to London.