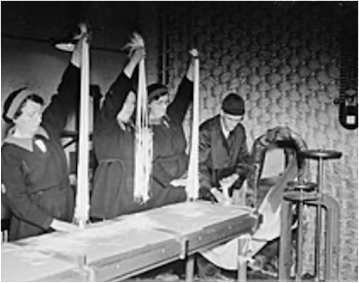 A military site between Wareham and Poole was so secret it was deliberately left off an Ordnance Survey map published in the 1940s. At its peak it was the largest industrial complex in Dorset employing around 2,000 people. It was the Royal Navy Cordite Factory. Cordite was a smokeless material developed to replace gunpowder as a military propellant. It was used in large weapons such as tank guns, artillery & naval guns. It was so called because of its cord like appearance.

The explosives site was built during World War I at Holton Heath with the help of around 500 bricklayers. First Lord of the Admiralty, Winston Churchill had decided the Royal Navy needed its own cordite manufacturing facility. During this war, certificates were issued to men working at Holton Heath to prove they were engaged on important war work and were not avoiding joining the armed forces.

The factory included a power station, two acid factories, a reservoir, various buildings and a hospital area. Adjacent to the Dorchester to Poole railway line, a five mile internal standard gauge railway was constructed and also a 14 mile narrow gauge network. Poole, Wareham, Wimborne & Bournemouth would provide the labour for the site. Despite much of the work being dirty and dangerous, there was no shortage of recruits because pay was better than working in local agriculture. Horton Heath railway station opened in April 1916 for Admiralty staff and was only made available to the general public from July 1924. In the early years, site security was provided by an armed detachment from the Metropolitan Police. So many people were employed there that two rail footbridges had to be built to accommodate the rush at the start and end of each shift. There was also a jetty in Poole Harbour from where cordite was shipped to Gosport. Large quantities of water were needed for cordite production so a pipeline was built from Corfe Mullen which pumped water from the River Stour.

There were many dangers in the Holton Heath processes and some of the working conditions were unpleasant with the risk of acid burns and the inhalation of dangerous fumes. There were also some serious accidents the worst being on Tuesday 23rd June 1931 when ten staff were killed including the chief chemist. A further 19 employees were injured. The explosion was heard as far away as Blandford.

Although cordite production ceased in 1945, Holton Heath remained open as a a military site but it eventually closed in the late 1990s.