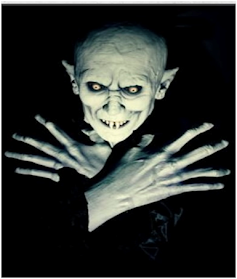 Not many towns or villages can claim their very own vampire…yet Tarrant Gunville can!

Tarrant Gunville’s vampire is reckoned to be William Doggett a ‘corrupt manservant’ who stole a large sum of money from his employer, the Second Earl Temple. The Earl had inherited Eastbury House, then one of England’s finest country houses, but was finding it far too expensive to run. In 1795, he moved to Italy and to reduce house running costs he instructed William Doggett to dismantle the wings of the massive property. The greedy Doggett believed that the Earl had moved permanently abroad and saw an opportunity to make money for himself. Doggett demolished the main house and also the south wing and then pocketed the proceeds from selling the building materials.

With evidence of his fiddling all around him, Doggett was told that the Earl had just alighted from the London mail coach. It had stopped on the Blandford – Salisbury Road at the Tarrant Gunville turning. The distressed servant scurried immediately into Eastbury House library and shot himself. Apparently, the blood stains on the marble-covered library floor could not be removed. William Doggett then passed into local folk-lore as it was said, not being worthy of being buried in consecrated ground, he regularly appeared in Tarrant Gunville Churchyard at night as a vampire. While according to author, Peter Underwood, the Eastbury House library doors would mysteriously open by themselves and William Doggett’s face would appear covered in blood.

In 1845, when Tarrant Gunville church was being rebuilt William Doggett’s body was exhumed. The body was found not to have decomposed and the face had maintained a rosy complexion. Bizarrely, it was also discovered that the legs of the body had been tied together with almost new broad yellow tape.

In the customary manner for vampires, a stake was driven through the body’s heart and it appears the Tarrant Gunville vampire made no further trouble for the village thereafter.