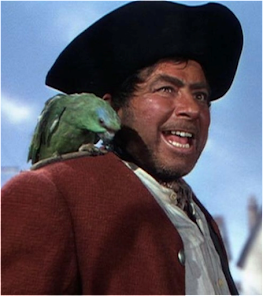 Why do all pirates talk with an exaggerated Dorset accent? Blame rests firmly on the shoulders of Dorset actor, Robert Guy Newton born in Shaftesbury in June 1905.

A colourful, hell raising individual, both on and off stage, Robert had a long and distinguished career in the theatre, in films and on television. For anyone who wants to talk like a pirate, it is almost obligatory to copy the vocal intonations of Robert Guy Newton. He excelled at playing cunning villains. With his thunderous voice and rolling eyes he mesmerised audiences. He is best remembered for playing the rapscallion one-legged pirate Long John Silver in the Disney film, Treasure Island and in its sequel made in Australia four years later. This was followed by a television mini-series filmed on Sydney beaches and on South Sea Islands in the mid 1950s. He had also played the two-legged but bearded pirate, Edward Teach in Blackbeard the Pirate in 1952.

Robert was married four times and is remembered also for his partiality to alcoholic drink. He was once nicknamed the ‘terror of Pinewood Film Studios’. On one occasion, Newton was so drunk he turned up at the wrong film set and started acting. Realising his good fortune, as he had such a big star and did not have to pay a fee, the director kept Robert in four scenes before the drunken actor realised his error and left. Another time Robert assaulted a car with a horse whip because it would not start. In 1952, he spent some time in a Hollywood Jail when he was taken drunk from a night club. Then in 1954, an application was made for his bankruptcy as he owed the British Inland Revenue £46,300.

Robert Newton was the son of talented landscape artist, Algernon Newton whose painting ‘a Dorset Landscape’ recently sold for £225,000. His four wives were Petronella Walton (1929-35), Annie McLean (1936-1945), Natalie Newhouse (1947-52) & Vera Budnik (1952). During World War II, Robert joined the Royal Navy and served on the Arctic convoys to Russia. In 1951, he was voted one of the most popular stars in Britain.

For his role in Around the World in 80 Days, Robert had agreed to keep off the booze while filming – a pledge he faithfully honoured. However, when it ended, he went on a colossal bender which probably killed him. Robert Newton died on the 25th March 1956 in Beverley Hills, California following a heart attack. Sadly, in his later years he had suffered from chronic alcoholism.

It seems entirely appropriate that Robert Newton is the patron saint of International Talk like a Pirate Day - celebrated each year in September. With his popping eye and husky exaggerated Dorset voice, he will always be the top movie pirate of all time. 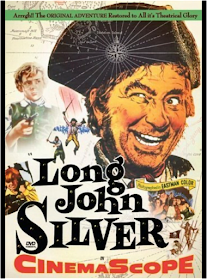