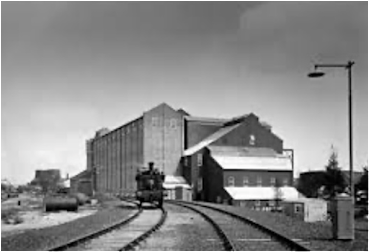 During World War I, an urgent call went out to scouts and school children to collect acorns and conkers. This request came from the Royal Naval Cordite Factory at Holton Heath. Young collectors were told this was valuable war work. The reason was not explained but an assurance was given to the gatherers that they would be paid for their collections. The factory had been built after the Admiralty had decided it needed its own cordite manufacturing facility. Holton Heath site had been chosen because it was away from centres of population yet still had good road, rail and sea links. The factory had its own site railway built and a jetty in Poole Harbour from where the cordite was shipped to Priddy’s Hard at Gosport.

Cordite was a propellant used in gun and artillery ammunition. During World War I, vast quantities were required and the chemical acetone was one of its constituents. At first acetone was distilled from wheat much of which washed imported from the USA. However by mid 1917, wheat was in short supply due to German submarines sinking shipping in the Atlantic Ocean. It was decided to use acorns and horse chestnuts, or conkers, as an alternative source of starch. The Government was loath to explain the reason for their use for fear the enemy might copy. One of the reasons given was to produce medicines to be sent to Russia for horses.

‘The Superintendent of the RN Cordite Factory, Holton Heath, near Wareham is prepared to pay at the rate of one shilling & three pence (6p) per bushel for good acorns in lots of 50 bushels and over delivered at the nearest railway station in the County of Dorset. A limited number of sacks are available and can be lent on application being made to the Superintendent, RN Cordite Factory who must be informed immediately the collection is completed in order that forwarding instructions can be given.’

Sadly, the use of acorns and conkers for the production of acetone was never to produce the yields that were originally hoped.