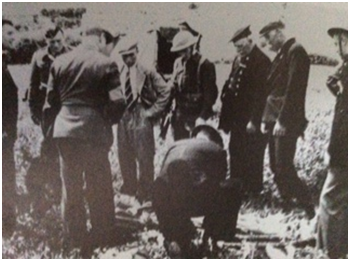 On 18th November 1940, Blandford was bombed by German aircraft when an estimated 100 explosive devices were dropped on the town and its outskirts. Yet Blandford was not an obvious enemy target with Portland’s naval dockyard, Yeovil’s Westland aircraft factory or the newly reopened army base at Blandford Camp being more obvious targets. So why did the German air force decide to bomb Blandford?

At the time the River Stour was in flood, so many of the explosive devices just fell into the water. However, an incendiary device did land on the roof of the Crown Hotel setting it alight. Thanks to prompt action by the town’s fire brigade, led by Captain C M Timbrell, the fire was quickly brought under control. Despite much charring to the beams, the fire fighters were able to confine damage to the hotel roof. After the raid, the brigade’s efforts were acknowledged by the hotel’s management in a letter enclosing a £10 cheque. It was decided, following the raid, to supplement the brigade’s water supply by drawing water from the River Stour.

During the autumn of 1940, the German army had planned to invade the south of England with landings in Lyme Bay. Had these landings taken place, Blandford would have played a key role in trying to hold back the enemy’s advance. The town’s recently installed anti-tank defences could have been the target of the 18th November 1940 air raid.

No mention was made of the Blandford air raid in the subsequent November 1940 edition of local newspaper, the Western Gazette. It was not until 1944, when the threat of invasion had receded, that the newspaper reported the bombing of Blandford. On 1st December 1944, the Western Gazette reported that between 1940 & 1944 120 high explosive bombs and some 310 incendiary devices had been dropped in the Blandford district. During this period four people were killed and five wounded. The fatalities were reported to be at Spetisbury, Charlton Marshall and two in Tarrant Gunville. The five injured included two German airmen.  They had survived the crashing of their Dornier aircraft which had flown from Cherbourg on a reconnaissance flight. Royal Air Force Hurricanes from Middle Wallop had shot the enemy aircraft down and the crew had to crash land at Nutford Farm on 21st July 1940 just north of the town. In September 1940, two German aircraft were shot down at Child Okeford and Tarrant Gunville.

In February 1943, a single German aircraft attacked Blandford Camp dropping a number of bombs. At the time, Brigadier H S Woodhouse, the local brewery joint-managing director, was the Camp Commander. Unfortunately, he lost his life during the raid.