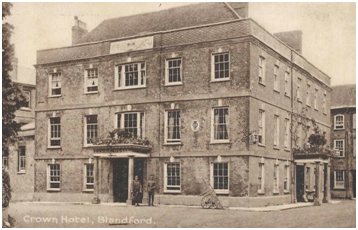 In 1931, Hall & Woodhouse bought the Crown Hotel for just £14,000.
Upon the bicentenary of the Great Fire of Blandford, the Rector of Blandford St Mary, the Reverend H Harrison published a booklet on the conflagration.
In 1932, German airship the Graf Zeppelin passed over the Blandford district giving locals a magnificent view as it journeyed from Yeovil to Southampton. It would return seven years later just before the outbreak of World War II to spy on the Westland aircraft factory at Yeovil.
Strong opposition arose against a proposal made by the Ecclesiastical Commissioners to link the churches of Langton Long with Pimperne. As a result the scheme was dropped.
Blandford had an airfield just north of the Salisbury Road Cemetery. Flights across the town could be purchased for just five shillings (25p). Sir Alan Cobham and a Captain Black were two of the pilots.
In 1933, floods followed melting snow as the town became almost completely isolated. Stranded cars had to be towed away with both West and East Street under several inches of water.
In 1934, local cinema owner Percy Carter had a new cinema, the Palace built on the south side of East Street. Designed by a Bournemouth architect it had a balcony which overhung some of the stalls. First film shown was Jessie Matthews in ‘Evergreen’.
The town’s Catholic Church was opened in White Cliff Mill Street.
In 1935, Blandford’s new post office was opened by the town’s first female Mayor Miss Ellen Gertrude Castleman-Smith. Its predecessor was located in West Street and closed for reputed health and safety reasons. Previously, the post office could be found in the Market Place.
In 1937, there was an outbreak of food poisoning in the district caused by the sale of infected corned beef imported from the USA.
About 60,000 fleeces were sold at Blandford Wool Fair with prices being the best for many years.
Local Government electors voted, by a majority of 135 to allow the Sunday opening of Blandford cinema.