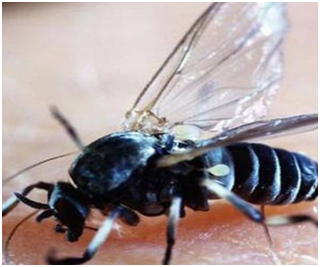 Their correct name is Simulium Posticatum, yet more commonly they are known as the Blandford Fly. It is a small, blood-sucking black fly that can be found in Blandford and in Russia and Eastern Europe. They are also considered a nuisance in Africa and North America.

The insect gained its name from the many people in Blandford being bitten in the 1960s and 1970s. In the spring of 1972, some 600 people visited their doctor in the town complaining of pain, itching and scratching in the lower leg.

Found in slow moving rivers similar to the Stour at Blandford Bridge, the female of the species seeks out a blood feast before mating. This blood meal is required before allowing its 200-300 eggs to mature. They lacerate the skin and then suck out the blood. Just two to three millimetres long, they also inject an anaesthetic so that the bite is not felt. However, if the bite is scratched germs are released causing the infection. Scissor like mandibles can deliver a bite with painful consequences. The bothersome bites to ankles and legs are most common in May and June. Apparently for every one Blandford man bitten, the fly makes a meal of four women.  Dogs are also favoured if no human flesh is available. The River Stour at Blandford has the ideal environment for the insect. It has steep river banks, stretches separated by weirs and a high weed density. The fly has a range of about one kilometre from water and flies at low levels. In the late 1980s, the River Stour weed beds were sprayed with a special insecticide which successfully resulted in a significant reduction in the number of Blandford people bitten.

Seizing a marketing opportunity, Badger Beers named one of its beers after the pesky insect. This beer has a generous dollop of ginger added to it. This is claimed to have a soothing effect on the swellings caused by the bite. The brewery has cautioned:

'Don't just take our word for it, ask any fisherman and they'll attest, it's not only the trickle of the trout that bites on the tranquil River Stour at Blandford. Should you wade these waters on a warm summer's night, beware the infamous Blandford Fly, whose bothersome bite can only be soothed with a spicy slice of fresh ginger.'

In 2010, the Independent newspaper claimed that the Blandford fly was moving from the countryside to the city. It headlined the article, ‘The rural flies with a taste for city flesh.’  This change is said to be caused by the growth of water features in domestic gardens. Perhaps Charlie Dimmock, the television gardening queen of the water feature, has a lot to answer for? Similar bites have been reported following Buckingham Palace garden parties so perhaps the Blandford fly is becoming more selective upon whom she dines? It also appears in a novel by John Sherwood where plotters planned to release a swarm of the flies during the Queen’s visit to the Chelsea Flower Show. However, fortunately this is  just  a piece of fiction.