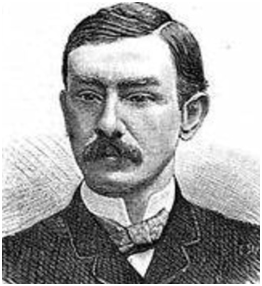 Three local men believed they had sound theories to identify Jack the Ripper. This was the name given to the murderer who savagely killed five women in London’s impoverished Whitechapel district in 1888. The three men with these views were Henry Richard Farquarson, Frederick George Abberline and Sydney Godolphin Osborne.

Henry Richard Farquarson, who has been unkindly nicknamed ‘loose-lipped Farqie’ was the controversial and outspoken Member of Parliament for West Dorset from 1885 to 1895. He lived at Eastbury House in Tarrant Gunville. Apparently, Farquarson claimed that the murderer was the son of a surgeon who had committed suicide. Fearing libel, he did not identify him specifically but his description pointed to Wimborne-born, Montague Druitt. In February 1892, the Western Mail later confirmed that the West Dorset MP’s theory was that ‘the author of the outrages killed himself.’ Druitt had committed suicide in November 1888 and his body had been recovered from the River Thames. Druitt was a lawyer who supplemented his income by teaching at a boarding school in south-east London. A talented sportsman, he played cricket for Dorset and was a Marylebone Cricket Club member. Druitt suffered from mental health issues and had resigned from his teaching post just prior to his suicide.

Frederick George Abberline was born in Blandford in January 1843. He became a distinguished Inspector in London’s Metropolitan Police and was a key figure in the Ripper investigations. He spent much of his career policing the streets of Whitechapel and Spitalfield. Abberline was  inaccurately portrayed by Hollywood actors Johnny Depp and Michael Caine in films about the murders. Despite in reality being a highly conventional character, Depp unfairly portrayed Abberline as a drug addict and Caine portrayed him with equal inaccuracy as a heavy drinker. Although normally tight-lipped about the identity of the Ripper, Abberline suggested in 1903 that his identity was George Chapman. The latter had qualified as a junior surgeon in Poland and had then come to London. George Chapman was executed in 1903 for the poisoning of his wife. He had four mistresses who all posed as his wife and he killed three of them by poisoning.

However, Frederick George Abberline also did not rule out the possibility that Jack the Ripper was a woman. This theory was shared with Sydney Godolphin Osborne who was the Rector of Durweston from 1841 to 1875. He was fascinated by the case. Lamenting the differences between the rich and poor, he regarded Whitechapel as a human cesspit. He reckoned the murder could have been a woman because of what he regarded as the treachery, jealousy and physical strength of the Whitechapel women!

Despite the theories of three local men, it seems likely the identity of the notorious Jack the Ripper will never be uncovered.