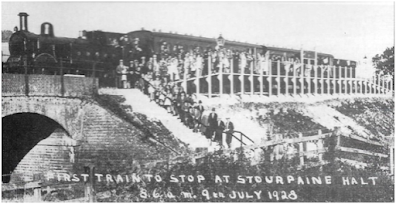 In 1926, twenty seven people were killed and 40 were injured in the Great Blandford Rail Crash. However, this was not in Blandford, Dorset but Blandford, New South Wales in Australia.

In 1927, Charles Hunt, the last surviving member of the Blandford Town Band which had won the National Brass Band Championship in 1863 died. Draper, A Cherry & Son of Salisbury Street published an apology in the Western Gazette newspaper stating that an employee had spread a false and ‘entirely untrue’ rumour that a Blandford doctor was leaving the town and giving up his local practice. Mr Warrilow, a blind organist and Director of Music for the National Institute for the Blind gave an organ recital in Blandford Parish Church.

In 1928, the first train that stopped at the newly opened Stourpaine and Durweston railway station halt was greeted by the two vicars and most of the population of the two villages. The halt closed in 1956.

In 1929, Frederick George Abberline died in Bournemouth. Born in Blandford, he was a Chief Inspector in the Metropolitan Police and was a key figure in the East London ‘Jack the Ripper’ serial murder investigations. Chief Scout Robert Baden Powell and Lady Powell attended the Blandford Scout and Girl Guide Rally. During their visit to the town they were granted the Freedom of Blandford. Dorset County Council took over responsibility for running Blandford Workhouse. During one month, during economic recession, 549 vagrants were admitted into the Workhouse. The early morning mail train was derailed at Blandford St Mary. Hall & Woodhouse acquired the Badger trademark from a Yorkshire mineral water producer.