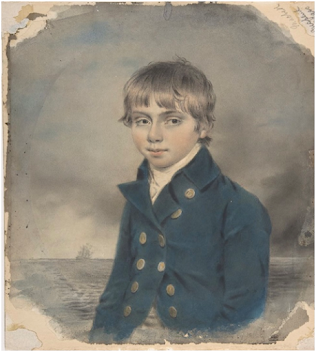 Benjamin Danford was just 14 years old when he was serving in the British Navy as a Midshipman in the Battle of Trafalgar in 1805.

He was the son of Nicholas and Mary Danford who lived in the village of Shroton in North Dorset. When he was baptised, in December 1792, it was quite a family event because also christened there at the same time were his brothers Joseph and young Nicholas junior.

Benjamin had volunteered to join the Royal Navy and began his maritime career in March 1805 on HMS Ajax. He saw early bloody action just four months later when his vessel was involved in the Third Battle of Finisterre. This conflict cost Ajax two men killed and 16 injured. The vessel had to return to Plymouth for repairs and then sailed for Cadiz with Nelson’s HMS Victory. At the Battle of Trafalgar, Ajax lost a further two men killed and nine wounded. While this bloody naval battle would have been traumatic and stressful for all involved it must have been particularly so for a 14 year old.

After Trafalgar, Benjamin remained in the British Navy but lost his life when HMS Ajax caught fire when berthed off Tenedos in the Aegean Sea in February 1807. Although 380 men were rescued another 250, including Midshipman Danfield, lost their lives. Many like him had been at Trafalgar. Also among the dead was Blandford born seaman, Joseph Coffin, aged 23, who had also served on HMS Ajax at the Battle of Trafalgar.

(Illustration: Portrait of a Young Midshipman)