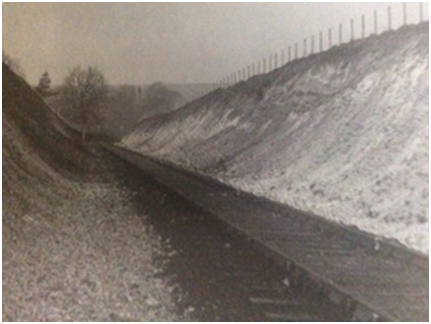 Nicknamed the ‘Powder Puff Line’, Blandford Camp railway probably had the shortest and most controversial working life of any railway in Britain. Blandford Camp railway was a small branch line built towards the end of World War I which connected the town with Blandford Camp designed to carry both supplies and personnel. It left the Somerset & Dorset line just to the south of Blandford Station passed along the borders of Langton Long, crossed the Blandford-Wimborne road and climbed up to the military camp. At the Camp end of the line there was a 200 yards long halt style platform. This remained in place until the 1960s.

Although today Blandford Camp is an army establishment, its first permanent occupants were the Royal Naval Division to be followed by the Royal Air Force in 1918. The RAF had been formed in April 1918 and its Blandford base of 15,000 military personnel became a major entry point for new recruits. It was also the location of the Royal Air Force’s Headquarter’s General & Records Office.

Unfortunately, the new base suffered from many problems. In expanding quickly, there were serious construction delays caused by a shortage of skilled building workers. Requests to improve pay rates were flatly refused by the Government because they were concerned about the possible repercussive increased pay cost effects on the large naval dockyards in the south and south west. Then, the Camp was severely affected by an influenza epidemic which caused the deaths of many young servicemen. Because of the construction delays, many had to be accommodated in crowded tents which encouraged the spread of the virus. There were disturbing stories of relatives arriving from distant places to view the bodies of young men who had left home in robust health a fortnight earlier.

The Blandford Camp railway line opened in January 1919 but, of course, by then the war had ended. Also that month, the Western Gazette claimed there were serious problems in the Camp.

‘Badly prepared and insufficient food, bad sleeping accommodation, bullying by non-commissioned officers and the absence of opportunities for exercise- all these have contributed to a depression and discontent that might have been avoided.

Built by McAlpines, the three mile line had cost £59,877 but on completion its construction was to become highly controversial. There was criticism that the line was heavily underused and that work should have been halted as soon as the Armistice had been signed in November 1918. A Parliamentary Question was raised as to why so many Women’s Royal Air Force clerks allegedly lived in Bournemouth and were brought to the Camp daily at Government expense. A local resident wrote to the Times suggesting there was much waste and inefficiency. The line gained the disparaging nicknames of the ‘Powder Puff Line’ and the ‘Scented Line’ because of the large number of RAF women clerks.

There can be little doubt that the early construction difficulties, the influenza epidemic and the alleged inefficiencies led to the decision to close the RAF camp. Within two years of opening the line was handed over to the Somerset & Dorset railway company and was only used occasionally for the transport of stores and equipment.

A Sale by Auction notice appeared in the Portsmouth News advertising a three day sale from Tuesday 27 May 1924 stating ‘the whole of the camp needs to be sold and is for sale without reserve.’  Included were 5.5 miles of permanent way with points, crossings and nine feet sleepers. Some of these items would soon exit Blandford Camp in a dramatic fashion.

Two months’ later there was what today’s railway companies would describe as an incident on the line. Trollies were being loaded with rails and other materials at the Camp end of the line. Suddenly and for no apparent reason, six trollies began to slowly move forward in the direction of Blandford before anyone could stop them. It is, of course, downhill all the way to the main line. At ever increasing speeds, the trollys hurtled across level crossings in White Lane and on the Blandford-Wimborne road. Fortunately, no-one was passing. At the junction with the mainline there was a closed gate and points set against the Blandford Camp branch line. So the trollies were derailed as they smashed against the gate and tumbled down an embankment. Heavy steel work was scattered everywhere.

The track was finally removed and an area close to the main line became a dumping ground for the town’s rubbish. Such was the sad end to the short life of the ‘Powder Puff’ line.