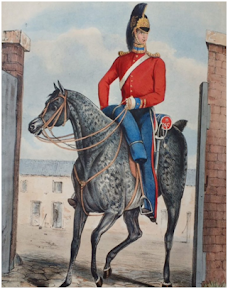 There were five Withrington brothers, all born in Blandford, and they were all hung at the gallows for their crimes. It is known because of his notoriety that brother Jack was hung at the infamous Tyburn, near Marble Arch in London. His brothers met their fates in different parts of the country but no records remain as to where these hangings occurred.

Jack Withrington was the youngest brother and he trained initially to be a tanner. However, he left his apprenticeship in Shaftesbury to become a soldier. He joined the Earl of Oxford’s Horse Regiment where he gained quite a reputation. This was as a result of being involved in two fights in which it was said he behaved with great valour. The first was with a man famous for his fighting in which Jack showed great skill and bravery. The second fight was with a man of great wealth, who was generally regarded to be a coward, when Jack behaved with much dignity.

Unfortunately, having achieved minor celebrity status Jack became, as is said today ‘rather up himself.’ He then paid a heavy price for a serious error of judgment. Jack challenged the captain of his regiment to a fight. As a result he was sacked from the army.

Gradually, Jack Withrington began gambling both winning and losing large sums of money. To improve his chances he often resorted to cheating. As his chicanery became better known, fewer and fewer were prepared to wager with him. With funds running low he acquired a horse and began a new career as a highwayman. His first victim was a farmer who was robbed of forty pounds.

His next victim was Edward Clark who recognised and knew his attacker. In the scuffle, Jack’s mask had fallen off. Clark remarked he hoped that Jack would not rob his old acquaintance.

‘Indeed I shall, sir,’ responded Withrington,’ for you get your money far easier than I do, who am forced to venture my life for maintenance; you have so much a year for eating, drinking and entertaining your lady with scandal and nonsense. What I shall take from you will do you little harm.’

In less than a year, Jack’s robberies were a topic discussed across the land. He then fell in love with a rich Bristol inn keeper who was unaware of his occupation. However, before the marriage took place, an Inn visitor recognised Jack for whom he was and told the landlady. As a result Jack was summarily kicked out of the Swan Inn. Having been kicked out of the Inn, Jack returned to the highway and his next victim was a tailor named Thompson. Having stolen thirty pounds, he was convinced the tailor was hiding more valuables among his possessions which he denied. When a further forty guineas were discovered, Jack accused the tailor of being dishonest. He then shot the tailor’s horse to hinder his getaway.

His final robbery was on Hounslow Heath where he stole 280 guineas, 60 pounds and some fine linen. Jack Withrington was arrested in Malmesbury, Wiltshire and taken to London for trial. He was found guilty and the Blandford born highwayman was hung at Tyburn on 1 April 1691.