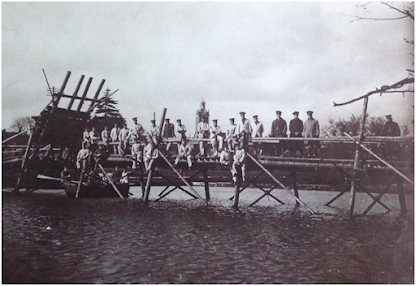 In 1916, a young boy was summonsed at a special children’s court hearing for stealing seventeen shillings & sixpence (87p). He said he was sorry and received three strokes of the birch as a punishment. An excellent Christmas lunch was enjoyed by inmates of the Blandford Poor Institution consisting of roast beef, roast pork, plum pudding, oranges, etc. The hall was nicely decorated by the cook, Mrs Crabbe. A crowd of more than 2,000 spectators attended the Recreation Ground to watch the first round of five football matches when teams competed for the Royal Naval Division (RND) Challenge Cup. Before the match, the RND depot band played a selection of melodies in the centre of the pitch. Members of the Royal Engineers practised bridge building across the River Stour. Townsfolk asked the military to stop playing the dead march as soldiers who had died were taken to the station. This had become a regular nightly experience.

In 1917, there were 1,400 German internees in the Blandford Camp’s prisoner of war camp. There were also internment centres on the Milldown and at Iwerne Minster. There were 34 ale houses, six limited on-site beer houses, two off-site beer houses and seven wine & spirit outlets in the town. Arthur Parker pleaded guilty to a breach of the Shop Closing Act. His wife had sold a little boy chocolate at 9.10pm and as a result Mr Parker received a fine of two shillings and sixpence (12.5p).

In 1918, a local baker was summonsed for selling bread to German prisoners of war. He was sent to Dorchester Jail for six weeks. During the ‘Spanish flu’ pandemic, it is reckoned between 50 and 60 young servicemen died each week in Blandford Camp. Local doctors were so overwhelmed by the number of influenza cases they could not visit patients. Two hundred & seventy German prisoners of war were working in a saw mill located on the Milldown which was part of an internment camp. Two German soldiers Franke Christopher and Kasten Heinz escaped from the Blandford Camp Internment Camp but were soon recaptured. Richard Cave of Spetisbury was summonsed under the Hoarding Order for being in possession of four hams. He explained he had been in the habit of buying green hams and allowing them to mature. The case was dismissed after he claimed that a mature ham went further as a food than a green ham.