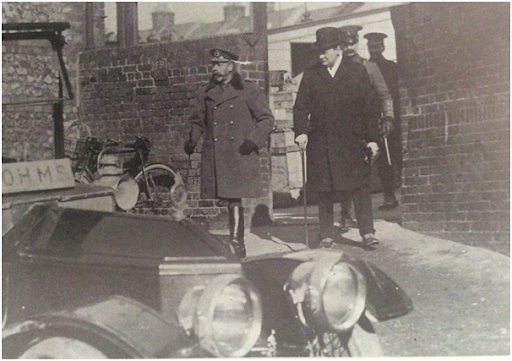 In 1911, Blandford Poor House had 76 inmates. Three ladies spoke in the Market Place in favour of giving women the vote. Several drunken men in the crowd pelted them with rotten fruit. They were escorted back to the station for their safety by members of the adult school. The police, it was reported, did nothing to help.

In 1912, Mounted Cavalry of the Dorset Imperial Yeomanry held an exercise at Blandford. The town was covered by four feet of snow.

In 1914, a military camp was built on Blandford Down, to accommodate the arrival of the Royal Naval Division. The Division consisted of sailors being trained to be soldiers. It had been set up by Winston Churchill because too many volunteers had applied to join the Royal Navy.  Sub-lieutenant Rupert Brooke was stationed at Blandford Camp. It is believed he wrote some of his best known sonnets there. He would die on the way to taking part in the Gallipoli Campaign.  Robert Locock, the town’s last surviving veteran of the Crimean War and Indian Mutiny died at the age of 78. The funeral party included members of the Royal Naval Division, now stationed at Blandford Camp, the 4th Dorset Regiment and the Blandford Lads’ Rifle Brigade.

In 1915, Winston Churchill dined at the Crown Hotel after inspecting the Royal Naval Division at Blandford Camp. Soon after, he returned to Blandford Camp with King George V arriving and departing from the town at Blandford Station.   Band of the 3rd Dorset Regiment played selections of music in the Market Place and on the Recreation Ground while recruiting sergeants were busy looking for young men not wearing military uniforms.   A cricket match took place between Blandford and the Royal Naval Division’s 2nd Reserve Battalion on the Recreation Ground. Tea was provided by a ‘bevy of ladies’ and the game continued until 7 o’clock. The home team ran out winners of a much enjoyed game by seven wickets.