Not Just One Blandford! 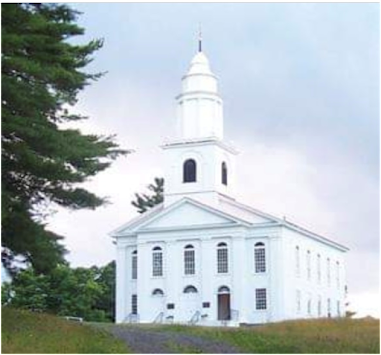 Blandford, Massachusetts is in the USA and was first settled by Scots and named ‘New Glasgow.’ However, the locals had misspelled the name as ’Glascow!’ William Shirley was the newly appointed Governor of Massachusetts and had just arrived from England. He decided to change the settlement’s name to Blandford after the vessel that had brought him across the Atlantic. However, the new town was to pay a price for this. The people of Glasgow, Scotland had promised settlers the gift of a bell if they named the new settlement after their city. With the town now called Blandford, the bell was never sent.

The White Church in Blandford Massachusetts was built in 1822 and in September 2022 the New England town celebrates the Church’s bicentenary. This historic building is owned by the Blandford Historical Society and is maintained by volunteers. Originally, the pulpit was near the entrance so that late arrivals could be seen by the congregation. However, in later modifications it was moved.

Back in 1781, the British Army fought in the Battle of Blandford. This skirmish did not occur in Dorset but in Virginia, USA. It took place during the American War of Independence. Some 2,300 British regular soldiers defeated around 1,000 locally recruited and poorly equipped militia men. Blandford, Virginia is now part of the town of Petersburg with a population of 32,000.

In September 1926, there was a major railway accident just outside Blandford. Two passenger carriages telescoped together and others overturned. Occurring late on a Monday night 36 were killed, including the locomotive driver, and 42 were injured. Yet this tragic accident did not take place in Dorset but in Blandford, New South Wales. It was one of the worst railway accidents in Australian history. Blandford, New South Wales is a small village some 190 miles north-west of Sydney. While today, trains still pass through, the village station has been closed for many years.

Blandford in Nova Scotia, Canada was founded in the 1760s by settlers from the Dorset town. The newcomers found the Canadian winters so cold that they cut ice to a depth of two feet but still could not find water. In Johannesburg, South Africa there is the suburb of Blandford Ridge while in Canada there is also the splendidly named Saint Louis de Blandford.

So, it can never be claimed, ‘there is only one Blandford!’