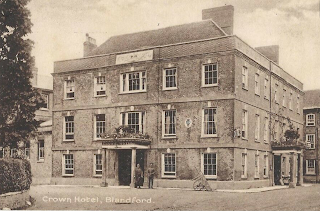 It is reckoned there has been a Crown Hotel on the current site in Blandford since at least the 17th Century. After the Great Fire of Blandford in 1731, the Crown Hotel had to be completely rebuilt. While highwayman John Poulter subsequently claimed that in 1762 he had stolen gold, silver and other valuables from the hotel which he had taken away to London.

Arrival of the horse-drawn coaching era much benefitted the Crown and the nearby Red Lion and Greyhound Hotels. For Blandford was on a main coaching route between Exeter and London. A coach known as the Blandford Flyer claimed it could transport its passengers to the capital in just two days. By 1820, the town was also a stopping point for horse drawn coaches to Brighton, Portsmouth, Bath and Plymouth. This traffic required the building of extensive stables and outbuildings at the rear of the hotel.

In 1859, before the opening of Blandford station, there was a ‘well-appointed’ horse drawn omnibus which left the Crown Hotel each Monday for Shaftesbury. This carriage also stopped at Semley station for a train connection to London. When the railway eventually arrived in Blandford in 1863 the Crown employed a coachman whose role was to meet all departing and arriving trains.

Wimborne born Robert Eyers became the owner of the hotel in 1855. He was not only a hotel owner, seller of beer and wines & spirits but also a talented musician. He had many contacts in the entertainment world and the hotel’s supper room was full of images of well-known musicians, many of which were autographed. He formed bands of many types who played at dances, concerts and dinners across Dorset. He was bandmaster of the Blandford troop of the Dorset Yeomanry. In 1863, Robert Eyers conducted the Blandford Town Band when it won the National Championship at Crystal Palace. There were 21 contestants being the best bands in the country and the Town Band beat the existing champions from Dewsbury.

The following year he invited music hall entertainer, Sam Cowell to Blandford to recuperate from a bout of ill health. Unfortunately, the star was an over boisterous heavy drinker so Eyers had to move him from the Crown Hotel to lodgings in East Street. Sadly, Sam Cowell died of consumption and was buried in Blandford Cemetery.

Robert Eyers became Mayor of Blandford and later managed both the Crown and Greyhound Hotels. He died in February 1885 and for a period after his death the Crown Hotel was managed by his widow. Many distinguished visitors have stayed or dined in the Crown Hotel. These include Winston Churchill who dined there in February 1915. This was during the course of a visit to Blandford Camp to inspect the Royal Naval Division who had been posted there.

The hotel was later owned by the Portman family. Thanks to their generosity, it was then taken over by George Henry Jones who had lost a leg in a hunting accident. In 1931 it was sold to current owners, Hall & Woodhouse for a reported £14,000.