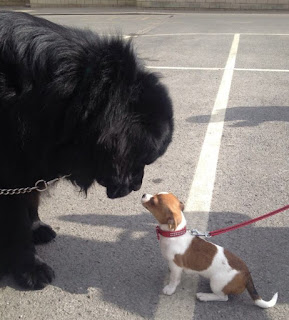 Henry Richard Farquarson was the outspoken and at times controversial Member of Parliament for West Dorset from 1885 until 1895. He was passionate about giant Newfoundland dogs and he lived at Eastbury House, Tarrant Gunville and was a major landowner. Farquarson had built up, over twenty five years, a pack of one hundred & twenty five giant Newfoundland dogs.  They were his pride and joy and among them was a Crufts prize winner. His dogs had been brought to Dorset from Newfoundland in Canada.

There had always been strong links between Poole and Newfoundland and the coastal town had become known as the best place to buy this breed of dog. In the early 1800s, Newfoundland dogs were often used to pull carts and were a common sight in the streets of Poole. Fear of rabies led to this practice being banned. Farquarson would regularly travel to Poole to collect his acquisitions. The Newfoundland is a huge animal and there is a story that one saved the life of Napoleon Bonaparte by preventing him from drowning. During his escape from Elba rough seas knocked the French emperor overboard and a Newfoundland dog kept him afloat until he could be rescued. How different would history have been if the Newfoundland had failed to do this? The breed is particularly known for its size, muscular strength and swimming abilities.

Henry’s massive dogs were exercised daily by two kennel lads. Keeping the two groups apart, one lad took seventy five dogs one way while the other took fifty bitches in another direction. Tragically, one day there was confusion about the routes and the two packs met up on Chettle Common. Normally, the Newfoundland is a large placid dog but on this occasion the males were unable to overcome their natural passion and aggressively began to compete for the females. A terrible, vicious and bloody dog fight followed and forty five animals were either killed or had to be put down. The young diminutive kennel lads had been unable to halt the battle of the massive warring canines. What happened to the unfortunate kennel lads is not recorded, although it is known that Henry Richard Farquarson was not reputed to be a man of an even temperament.

Farquarson’s outspokenness is evidenced by a legal case following the 1892 West Dorset election when he stood as the Conservative candidate. Probably concerned he might not be re-elected, he began a dirty tricks campaign against his Liberal opponent, Charles Gatty. He falsely suggested that his opponent had been expelled from Charterhouse School at the age of 13 for immorality. Following a legal case which he lost, Farquarson was required to pay Gatty £5,000 in damages although this sum was reduced upon appeal.