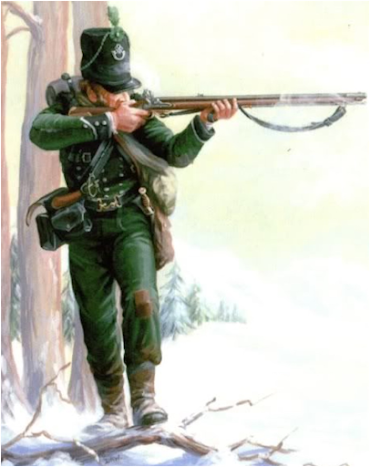 Benjamin Randell Harris was a rifleman who served in the British Army between 1803 and 1814. Born in Portsmouth, his family moved to Stalbridge in North Dorset when he was still a child. His father, Robert was a shepherd and Benjamin as a youngster would help tend the sheep across the Blandford Downs.  Later, Benjamin would train as a cobbler.

In 1803, Benjamin was selected by ballot to join the British Army for which he was paid a bounty of eleven pounds. Forty five years later, a book would be published recounting his army experiences. Like most ordinary soldiers of the time, he was illiterate so he related his memories to Captain Henry Curling who produced the book – A Dorset Rifleman. It is one of the few accounts of the life of a common soldier of the time. During his service, he was randomly selected to be part of a firing squad to execute a deserter – an experience understandingly, he found particularly disturbing.

Benjamin Harris served in Ireland, Denmark and in the Spanish Peninsular War. Unlike many of his comrades, he survived these conflicts unhurt but the sights and horrors he witnessed remained with him for the rest of his life. In his next expedition to Walcheren, on the Dutch coast, he was less fortunate whose aim was to make the port of Antwerp unusable to the French Navy. It was a disaster. In a force of 40,000, 4,000 died and 12,000 became permanently disabled mainly due to diseases such as dysentery, cholera and malaria. Benjamin Harris was one of them. He survived only because he was able to buy extra medical care financed by income from additional work as a cobbler. However, he was now unfit for military service and was discharged from the army. As a result he lost his accrued military pension of sixpence (2.5p) per day which he had not yet drawn. From thereon, he worked as a cobbler. In his discharge papers, he is described as 5ft 5ins tall with black hair, grey eyes and with a dark complexion.

It was when Benjamin Harris was working as a cobbler in Soho, London that Captain Curling sought him out and persuaded him to relate his memories for posterity. In May 1853, the United Services Gazette reported:

‘He (Benjamin Harris) fought at Copenhagen, the Netherlands and in the Peninsula. He was rendered unfit for service by the horrible Walcheren fever and yet he has no pension! At seventy-three years, he makes shoes in James Street, Golden-square and a hard matter it is to make and mend enough to keep life and soul together.’

It is understood that Benjamin Randell Harris died in 1858 and is buried in Bethnal Green, London.

(Source: A Dorset Rifleman – the Recollections of Benjamin Harris (1995) by Eileen Hathaway.)