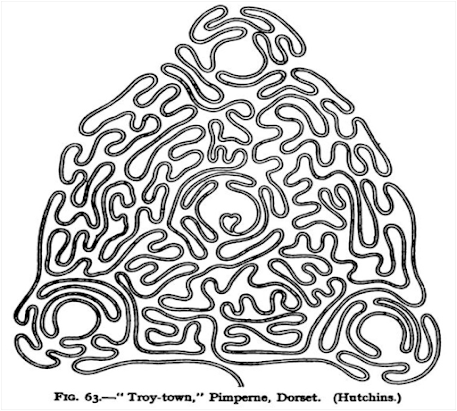 In France, the Palace of Versailles near Paris had a maze, Hampton Court in London had a maze and at one time so did Pimperne. It could be found where Blandford Cemetery is today, an area that was once part of Pimperne.

‘At Pimperne, not far from Blandford, there was formerly a maze of unique design (Fig.63). John Aubrey writing in 1686 says it was “much used by the young people in holydays and by ye school-boies.” The maze was destroyed by the plough in 1730.’

Pimperne’s Maze was also known as a ‘Troy-Town’ or ‘miz-maze’. In popular legend, the walls of Troy were constructed in such a confusing manner that an enemy who entered would be unable to find his way out. While an old West Country expression, ‘I was in a miz-maze’ meant to be in a state of confusion. ‘Masen’ was an old English word and meant to puzzle. The village maze had small earth ridges about one metre high. It covered about an acre of ground with intricate walks around an open space at the centre. It was so arranged, if they were not careful, individuals would soon lose their way out.

Pimperne Maze had no junctions or crossings and appeared more like a long rope neatly arranged to fill an area. Shakespeare also wrote about mazes in the Tempest and in Mid Summer Night’s Dream.

‘There were many mazes in England before the Civil Wars, and the young people used on festivals to dance, or as the term was, to tread them.’

Philosopher and writer, John Aubrey in the 17 century wrote:

‘Sometimes on holy days or play days we boys go to tread the maze at Pimperne which is near Blandford.’

Origins of the Pimperne Maze are not known though one theory has it that it was built as a game for young Romans. Another theory is that monks were rumoured to crawl on hands and knees as a form of penance. Leigh, near Yeovil, also had a maze which it is said is associated with witchcraft. William Barnes wrote of the annual repair of mazes by young men and clearly felt it was for games and ‘not for any heathenish or other ceremony of elders.’ Mazes, if not regularly renewed could soon become obliterated. Appropriately, Troy Town, near Dorchester, at one time also had a maze.’

Folklore reckons that a maiden would stand in the middle of a maze and a would-be suitor would run its length. Should he do this without putting a foot wrong, he would be permitted to dance with her. In another variation, if he wished to keep the maiden, he would have to carry her out of the maze!

Sadly, a local farmer ploughed up Pimperne’s Maze in 1730 to be somewhat later turned into a burial ground.