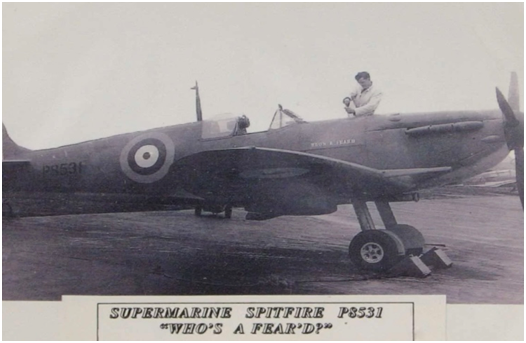 WHO’S AFEAR’D is not just the motto on the Dorset Coat of Arms but also the name of a Spitfire which crashed near Meopham, Kent on 23rd June 1942. This fighter aircraft had been funded by local contributions from Blandford & Sturminster Newton district people and paid for in a manner which today would be called crowd funding. Many years later, Graeme Sinden was excavating for a swimming pool in his back garden near Camer Park, Meopham when he came across aircraft wreckage. Experts were called in and the plane was identified as Spitfire WHO’S AFEAR’D. (P8531) It had been built at an aircraft factory in Castle Bromwich in the Midlands.

In September 1940, Shroton had raised twenty six pounds for the Blandford & District Spitfire Fighting Fund. The next month, Child Okeford held a concert in the packed village hall and sent in seven pounds. A Winterborne Whitechurch Dance in November 1940 raised eight pounds, two shillings & sixpence (£8.12) while a Winterborne Stickland Social resulted in three pounds & three shillings (£3.15) being raised. Also in November, ten shillings (50p) was sent to the Fund from the sale of acorns gathered by children and sold for pig food. By December 1940, Blandford had raised £3,300 and Sturminster Newton just over £1,000. Soon the nominal target of £5,000 was achieved.

The Spitfire is probably the most iconic aircraft ever designed and built in this country. Almost from the moment it took to the air it attracted almost film star attention. WHO’S AFEAR’D was one of around 20,300 Spitfires built. Lord Beaverbrook wrote to Blandford’s Mayor (Mr J E Conyers), ‘this fighter aircraft …will I know seek out the enemy in the spirit of the motto  it will carry.’

WH'O'S AFEAR'D was flown by two Polish fighter pilot aces. Marion Belc flew the Spitfire with 303 Sqaudron destroying German Me109 aircrafts on the 24th & 26th June 1941. Then Stanislaw Skalki, Poland's top wartime fighter pilot, did likewise downing Me109s on the 19th & 21st August 1941. On 1st September 1941, P8531 was damaged when landing when it hit a manhole not repaired. The pilot, another Polish ace, Henrique Pietzak was unhurt. The aircraft was sent to Southampton for repair and flew again in January 1942.

The Blandford & Sturminster Newton district funded aircraft was  finally flown by David Malloch who was just 21 years old and came from Otago in New Zealand. It seems he had taken off from Detling, Kent on a low level flight for the purposes of training anti aircraft gunners. He failed to pull out of a sharp turn over Camer Farm and stalled. It proved to be too low for the pilot to pull out and he crashed.

A Commemoration was organised in 2007 to coincide with the 65th anniversary of the crash. His niece came over from New Zealand and she stayed with the Sinden family. David Malloch is buried in Maidstone Cemetery. Highlight of the Commemoration was a fly past of a Spitfire and Hurricane from the Battle of Britain times.

(Illustrations: Gravestone of David Malloch in Maidstone Cemetery & an unknown sailor in the WHO'S AFEAR'D Spitfire's cockpit.) 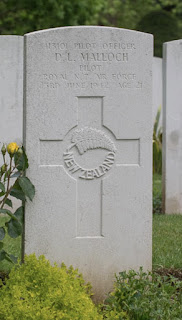 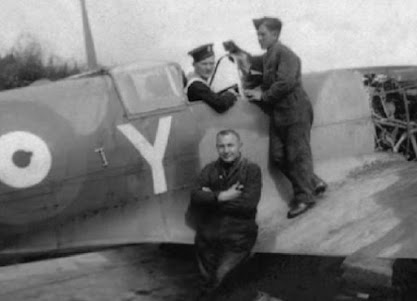