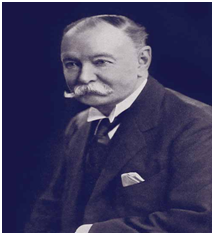 ‘The Bournemouth air is toney
It bucks you up, and fills you out, if
Thin as macaroni.’
‘To learn about the Milk Supply, I nosed about with stealth.
Reports I found, were published by the Officer of Health.
The cowsheds and the dairies are inspected, you may read
And authorities assert that they are very fine indeed.’
‘That beautiful creature called Kate
I met near Kensington Gate.
She’d a costume like Eve’s
Minus stockings and sleeves
But otherwise quite up to date.’

‘If you go to the Boscombe Arcade
No excitement you’ll meet I’m afraid.
You won’t find the place is a tax on your strength
Four hundred and forty three feet is its length.
You walk to and fro with a dignified air:
Then you walk fro and to, or you sit on a chair;
And there isn’t much else you can do when you’re there.’

‘Let me say a few words on the Square
From which you can get anywhere.
A well-designed centre, there isn’t a doubt
With features that fascinate all round about.
The sea trips from Bournemouth are many
Don’t say you haven’t tried any.
They’re cheap and enjoyable, when you’re in fettle
And doubtless they put a man on his mettle.’
‘The Canford Cliffs Hotel will do you very well
I’ve met girls when I’ve stayed there,
And in love I always fell.
At the Branksome Tower a minx
Once took me on the links.
She played with me, and holed in three,
And let me in for drinks.’
‘It’s built in various sections,
Sea views in two directions.
As for social meeting.
For drinking or for eating.
Tea rooms and beauteous balconies
Beset with flowers and shrub.
Where roughly fifteen hundred people
All can take their “grub”.’
(An Ode to Bournemouth Pavilion)
‘Let the bombs bounce round about us
And shells come whizzing by.
Down in our Air Raid shelter
We’ll be cosy, you and I.’

Sadly, this last poem was written just before Cumberland Clark and his housekeeper were killed in an air raid on Bournemouth on 10th April 1941. Multi-talented Cumberland Clark, the magnificently awful ‘Bard of Bournemouth’ also wrote in 1924 the words to the smash-hit song, Ogo Pogo!