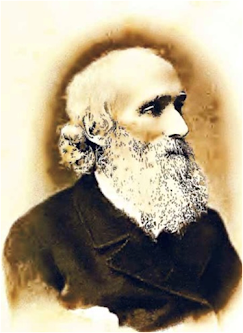 While Florence Nightingale may be regarded as the pioneer of modern nursing a now almost forgotten Dorset cleric played a not insignificant role.

Reverend Sydney Godolphin Osborne from Durweston travelled out to Turkey, at his own expense, to witness the appalling conditions in a British military hospital in Scutari, Constantinople. This was during the Crimean War (1853-56) when the British, French & Turks were fighting the Russians. He found soldiers wounded and dying in horrifying conditions. There were rats and lice in the hospital which was located close to a cesspit. He observed men lying in bed with dysentery or with open sores who had not had a change in linen for months. It is reckoned for every British soldier who lost his life in battle there were seven who died due to disease.

‘I sought the truth and took my own way to arrive at it. Whether that truth would please or displease the public or the Government was to me a matter of indifference.’

Osborne spent six weeks in Turkey and met and observed the work and organisational abilities of Florence Nightingale who had arrived a few days before him.

‘Her nerve is wonderful. I have been with her at very severe operations…I have known her spend hours over men dying of cholera or fever.’

When he left Scutari, he passed a four mile long line of occupied beds. Back in Britain he wrote ‘Scutari & its Hospital’ – a book by Sydney Godolphin Osborne. Such was the effectiveness among the public and parliamentarians of his publication, exposing the hospital’s shortcomings and of Florence Nightingale’s good work that a Parliamentary Committee of Enquiry was set up.

While Florence Nightingale after Crimea turned nursing into a true profession, the Reverend Sidney Godolphin Osborne from Durweston played his part.