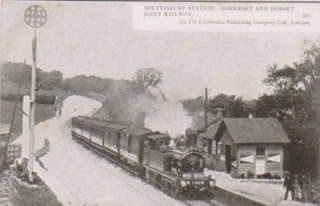 In 1855, Wimborne born Robert Eyers, a fine musician with many contacts in the musical world, took over the Crown Hotel. He would later also run the Greyhound Inn and in 1883 would become Blandford’s Mayor.

Blandford Cemetery opened. A dispute arose between the Mayor and the town’s inhabitants and the Bishop of Salisbury concerning the cemetery consecration. The Bishop insisted a communion table be placed in the cemetery to which the town objected.

The Corn Exchange was built costing £645.

In 1859, local newspaper, the Blandford Express was first published by editor, James Bartlett. It continued to appear until 1895.

A well-appointed horse drawn omnibus left the Crown Hotel daily for Shaftesbury. On the way it stopped at Semley railway station for a train connection to London.

At Blandford Petty Sessions John White was charged with poaching. The magistrates were so  amused by the old fellow’s defence they decided to dismiss the case. After previous protestations of his innocence, he replied, ‘Thankee gentleman, thee shall never catch I poaching again.’ A roar of laughter broke out across the courtroom.

A cricket club was formed. Members met on Tuesday and Friday evenings for practice in a  meadow lent by Mr Locke.

In 1862, protests were made because of ‘improper shows and exhibitions in the Market Place.’