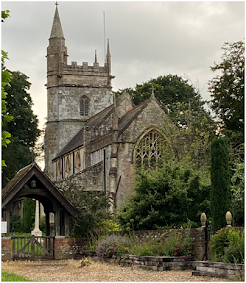 Pimperne Churchyard is said to be haunted by the severed hand of a soldier called Blandford. Despite his surname, trumpet-sergeant Blandford came from the village of Pimperne. So, when in 1780 he was posted to Blandford, soldier Blandford was delighted to renew the acquaintance of his old chums. A popular character in the village, he was well known for his dry sense of humour. Like his Pimperne mates, Blandford had a lucrative pastime and that was poaching.

A local tenant farmer wrote at the time to his landlord:

‘Poaching has got to such a thing in our parish, that almost every boy at the age of 14 years practises it, which I fear will lead to further mischief.’

Most popular location for poaching deer was Cranborne Chase, particularly around the village of Sixpenny Handley. So, trumpet-sergeant Blandford soon organised a group of Pimperne poachers to head north in the direction of the Chase. Sadly, for the villagers, there had been loose talk and a group of local gamekeepers had been forewarned of this illegal excursion.

On the night of 16 December 1780, five gamekeepers lay in wait on Chettle Common for the approaching Pimperne poachers. The deer hunters, wearing straw hats, were all armed with swingels. These were robust agricultural tools, the striking parts of which were made of iron. The two opposing groups clashed on Chettle Common and a bloody battle royal ensued.

Blandford struck the first blow which broke the kneecap of a gamekeeper who was described as the ‘stoutest man on the Chase.’ As a result, this gamekeeper was permanently disabled for life. Another keeper having suffered three broken ribs from a blow, sadly died some time later. Unfortunately for the poachers, it was not an equal contest as the keepers were also armed with cutlasses. One of the trumpet-sergeant’s hands was summarily severed just above the wrist and it fell to the ground. The other poachers were also dreadfully cut and wounded which obliged them to surrender. Blandford was carried to a nearby hunting lodge with his arm tightly bandaged to reduce the bleeding. As soon as he was well enough, he was removed with his companions to Dorchester Jail.

The offending deer hunters were tried, convicted and sentenced to seven years’ transportation. However, the judge allegedly, in view of their medical suffering, commuted the sentence to confinement for an indefinite period. The trial had been a popular entertainment with the Dorchester crowd whose strong sympathies were with the accused. The judge’s clemency was unusual for the times. The decision may have been influenced by the fears of civil disorder.

So what happened to Pimperne’s popular trumpet-sergeant of dragoons? Bizarrely, and perhaps reflecting his popularity and his dry sense of humour, the severed hand was reportedly buried in Pimperne Churchyard with full military honours. Ironically and upon release from Dorchester Jail, Blandford set himself up as a London meat trader. Sometime later he was spotted and approached near the Strand by a Cranborne Chase landowning clergyman. Cheekily, Blandford offered to buy game from him adding that he had enjoyed many of his fine hares and peasants in the past!

In the late 1700s, it was reckoned to be unlucky to bury a body incomplete. This may have been the reason for a story of Blandford’s ghostlike severed hand being occasionally seen in Pimperne Churchyard. Allegedly, it was desperately searching for the rest of the trumpet-sergeant’s body!

The site of the bloody battle became known as Bloody Shard Gate.