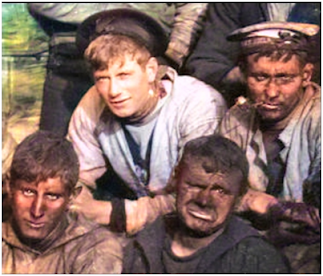 Blandford Camp has always been associated with the British Army. Yet at Christmas 1914, the Camp was jammed packed with sailors…and they weren’t happy! These miserable matelots had joined the Royal Navy to serve at sea in, what was at the time, the world’s largest, most powerful and prestigious maritime force. However, they now found themselves on land at wet, muddy Blandford Camp.

They were billeted in poorly heated wooden huts many of which were leaky. Furthermore on the exposed downs it was bitterly cold, it was raining continuously and there was mud everywhere. These sailors were being trained to be soldiers. They had been allocated to the Royal Naval Division which had been set up by Winston Churchill because too many volunteers had applied to join the Royal Navy. Many of this unhappy crew were naval stokers who were renowned for their resourcefulness, rowdiness and heavy drinking. Their normal role was to stoke and maintain ship boilers, a dirty, dusty, thirsty and extremely hard job.

So as Christmas approached, these landlocked jack tars were determined to make the most of their situation and resolved to ‘splice the mainbrace.’ This was navy-speak and normally meant to partake in a tot of rum for a job well done. However, to the stokers stationed at the Camp it meant excessively to imbibe alcohol in both Blandford Camp and Blandford town. The road down to Blandford was an unmade muddy track which was particularly unwelcoming in pouring rain. Yet this did not put these sailors off. When Christmas Day arrived, those remaining in the camp continued on the spree. The woods surrounding the Camp began filling with snoring stokers sleeping off the effects of cheap gin, rum and beer. Meanwhile, in the middle of the parade ground a very fat, jolly, but extremely drunk chief petty officer conducted the band while badly dancing an Irish jig.

Maybe the officers of the Royal Naval Division were turning a ‘Nelsonian blind eye’ to the proceedings as they had some appreciation as to what the stokers would be facing in the New Year. Shortly, they would leave Blandford Camp to take part in the disastrous Gallipoli landings where many would lose their lives.