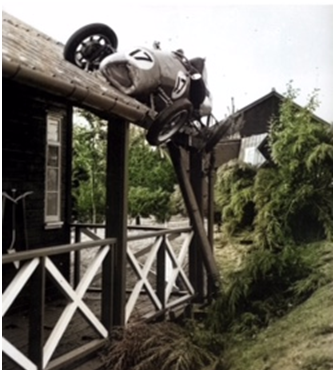 Between 1948 and the early 1960s, Blandford Camp was nationally known for its racing car and motor cycle circuit. Racing at the time was particularly dangerous with few safety measures and frequent accidents some of which were fatal. Some observers reckoned the Blandford Camp roads were far too narrow for passing.

On the 27th August 1949, the first post-war closed circuit, racing car meeting was held at the Camp and involved several races. During the day’s third race for sports cars, Gordon Woods lost control of his vehicle when it hit the kerb and demolished a bus shelter. The driver was thrown out of his cockpit and suffered serious head injuries. He later died in Blandford Hospital. Despite this accident, the race meeting continued.

Major Peter Braid was leading in the next race but had not been racing for long. At the same point as Woods’ accident, Braid hit the kerb and then at speed hit the damaged bus shelter. It acted like a ramp and his racing car was catapulted over a ditch and a fir tree onto the roof of the guardhouse. Miraculously, although Peter Braid was ejected from his vehicle, all he suffered was just a few bruises. He could have landed in a ditch, crashed into the building or even landed upside down. The damaged car was left stranded on the roof for the rest of the meeting as stunned drivers continued to drive by. Finally, the meeting’s last race had to be stopped because of another accident. Although regarded as sissy at the time, these accidents eventually led to the mandatory wearing of safety helmets. Following a further accident the next year, racing car meetings at Blandford Camp were discontinued. However, motor cycle racing carried on until the early 1960s.

Sadly, Major Peter Braid’s luck finally ran out in December 1955 when he lost his life in the Barnes Railway Accident. A passenger train crashed into a freight train due to a signalling error.