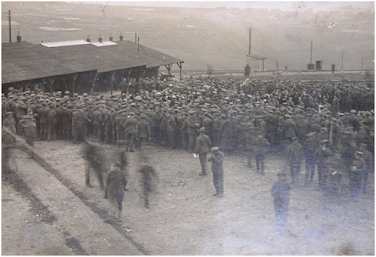 Around 100 years ago, there was an influenza outbreak in Blandford and the surrounding villages which had similarities with the corona virus pandemic. Just as Boris Johnson and Prince Charles have been viral victims so were Prime Minister David Lloyd-George and King George V in 1918.

Called ‘Spanish Flu’, there is little on record showing how the Blandford district was affected. This was because of widespread press censorship. At the end of World War I, newspapers were not allowed to publish stories that might have undermined national morale. However, at Blandford Camp there were so many ‘Spanish Flu’ deaths that the authorities were unable to suppress this story. Today, the camp is associated with the British Army yet in 1918 it was a massive Royal Flying Corps/Royal Air Force base.

Blandford Camp’s story broke in October 1918, when it was suggested that sick recruits had to lie on dirty straw mats and there were insufficient doctors and nurses. Despite this, new recruits continued to arrive. The virus seemed to leave people with disturbed minds. A Blandford RAF serviceman wrote that a small wood nearby was known as ‘Suicides Wood’ because of the number of men with flu committing suicide there. It was claimed there were between 4,000 and 5,000 men under canvas at Blandford Camp. Ten men slept in each hut and there were no drying facilities. The overall death rate was reckoned to be between 50 and 60 young servicemen each week.

On 6 November 1918, the Under-Secretary of State to the Air Ministry, Major Baird responded to a parliamentary question on the conditions at Blandford Camp.  He reported that between 21 September and 2 November 1918 the average number of men under canvas was 6,611. Furthermore, there had been 77 deaths at the Camp as a result of the influenza virus.

Unlike corona virus, ‘Spanish flu’ disproportionately affected fit people between the ages of 20 and 40 years. It struck quickly as victims could be fine at breakfast but dead by tea time.

‘I had a little bird, its name was Enza, I opened the window and in-flu-enza.'

Graves in Blandford Cemetery of young Royal Air Force recruits who died between October and November 1918 are likely to be those of victims of the influenza epidemic. ‘Spanish flu’ was one of the greatest medical disasters of the 20th century. There were three separate epidemic waves and an estimated 500 million people worldwide became infected.

(Illustration: Blandford Camp in 1918 but without social distancing!)