Samuel Johnson - Our Man at Trafalgar! 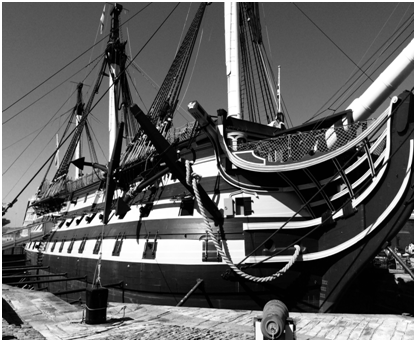 When Admiral Horatio Nelson defeated the French and Spanish Fleets at Trafalgar on 21st October 1805, there was a Blandford man aboard his flagship, HMS Victory.

Able seaman, Samuel Johnson had been born in the town in 1770. By 1805, he was an experienced seaman having served in the British Navy for at least five years. Such were his capabilities, he was able to take over from the Victory’s helmsman and ensure the vessel remained on course. He had joined the Victory in April 1804.

Why and how he joined the Navy is not known. He could have been forced to join by a marauding ‘press gang’, he could have volunteered or chosen the sea as an alternative to a spell in prison. The latter was a frequent method of sailor recruitment at the time. Initially, Samuel during his first year at sea would have been described as a ‘landsman’, then an ‘ordinary seaman’ before promotion to ‘able seaman’.

Samuel Johnson survived the Battle of Trafalgar on HMS Victory, a vessel that suffered 57 deaths, including Admiral Nelson, and 102 injured. Victory had a complement of about 850. Although no British warships were lost, the British Navy suffered 458 deaths and 1,208 injured at Trafalgar. The French and Spanish position was far worse with 4,395 killed and 2,541 wounded. In addition, some 7,000 personnel were captured.

On Christmas Eve in 1805, Samuel Johnson was discharged from Victory and joined HMS Ocean. This was a brand new vessel which had just been launched in Woolwich Dockyard. This would have been a prestigious posting for Samuel as it became the Flagship of Admiral Collingwood in the Mediterranean.  He remained aboard the Ocean until July 1809. He then spent a short time with HMS Salvador del Mundo, a captured Spanish vessel, where he was late returning from leave. ‘Ran’ was entered on his service record. Two months later, he was back in the Navy on HMS Armide. In September 1810, its crew were involved in an assault on a French gun battery. On the Armide, he was promoted to Quartermaster's Mate.

Blandford born Samuel had survived the Battle of Trafalgar and other skirmishes at a time when far more lives were lost due to diseases and accidents than in battle. On 9th January 1812, Samuel Johnson was discharged from the British Navy. No trace has been found yet of his return to Blandford and he may have settled in one of the naval ports.

While Samuel Johnson was the only Blandford man aboard HMS Victory, there were seven Blandford born men aboard other vessels in the Battle of Trafalgar.