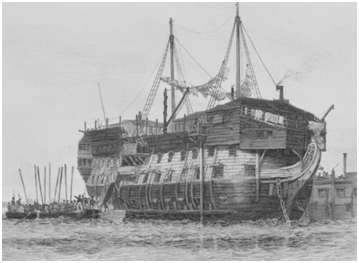 On Thursday 22 March 1832 in a Dorchester courtroom, the jury found George Long guilty. He had been indicted of having both riotously assembled and of beginning to demolish the property of lawyer George Moore. Stephen Gaselee was the judge and he passed sentence of death on Long leaving him with no hope of mercy. Author Charles Dickens allegedly caricatured Judge Gaselee as having ‘a broad pink face surrounded by a big and very comical wig.’ Dickens also wrote ‘his temper borders on the irritable and brooks no contradiction. George Long was sentenced to be hung in Dorchester Jail on 31st March 1832.

In Blandford and surrounding villages there was strong opposition to the severity of the penalty and a petition for clemency was organised which many signed. No doubt fearful of further rioting, and despite initial reluctance, Gaselee commuted the sentence to transportation for life.

George Long was transferred from Dorchester Jail to the Captivity, a rusting prison hulk berthed opposite Plymouth’s naval dockyard awaiting transportation. He would probably have had to walk the hundred or so miles from Dorchester to Plymouth with other Dorset convicts under armed guard.

Known as ‘hell on water’, convict hulk conditions were terrible, the stench appalling and poor hygiene led to sickness and many deaths. Captivity had once been the proud British warship, HMS Bellerophon on whose decks Napoleon Bonaparte had surrendered in 1815. As a convict, George Long had two heavy irons placed on one leg. Awaiting transportation, he was put to work on heavy and hazardous labouring duties in Plymouth dockyard.

On Tuesday 9th October 1832, George Long was transferred to the convict transport vessel, the Circassian for the long and hazardous journey to Van Diemen’s Land – now Tasmania. As the vessel slipped out of Plymouth Sound, George Long knew he would never see the rolling hills of Dorset again. Then, the docking of the Circassian in Hobart, Van Diemen’s Land had to be delayed because of an outbreak on board of cholera.

George Long did not have to serve out his life sentence as a convict as he was able to obtain his freedom under the ‘ticket of leave’ system which operated in the Australian colony. During his time as a convict he was regarded by his masters as a troublemaker. He had several masters and there are records of George Long being frequently disciplined for insubordination.

After his release he found employment as a seaman on a sailing barque which plied its trade between Melbourne and Launceston, Van Diemen’s Land. One dark night in Melbourne, he was on deck. He went forward to find a light for his pipe but accidentally fell into the ship’s hold. George was badly injured and had to be taken to hospital where he died.

A sad end to the life of Blandford rioter, George Long.