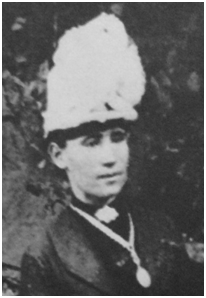 Born in 1811, Frances Jeans was one of Australia’s earliest teachers. In the villages Durweston and Stourpaine there were several Jeans families. At this time, Stourpaine had a particularly unsavoury reputation for unsanitary living conditions and extreme poverty. The Hampshire Telegraph was to write in 1840 of the village:

‘The first feature which attracts the attention of a stranger entering the village is the total want of cleanliness which pervades it. A stream, composed of the matter which constantly escapes from the pigsties and other receptacles of filth, meanders down each street, being here and there collected into standing pools, which lie festering and rotting in the sun so as to create wonder the place is not the continual abode of pestilence – indeed the most malignant fevers have ravaged here at times. It may be sufficient to add for the present that the inside of the cottages in every respect corresponds with the external appearances of the place.’

In October 1836, Frances married Benjamin Weeks, an illiterate agricultural labourer from Sixpenny Handley. She was not joining the most law-abiding of families as her father-in-law John was a notorious poacher who had spent time in Dorchester Jail and also in a prison ship hulk berthed off Gosport. Unusually for the times, Frances was able to sign her name on the marriage register. She may have learnt to read and write at a small Durweston school sponsored by Lady Emma Portman. Emma was an influential member of Queen Victoria’s court and keeper of many royal secrets. Frances and Benjamin were an ambitious couple and determined to find a better life for themselves and their children. As a consequence, they were selected by Chettle’s Reverend John West for an early assisted passage scheme to Australia sponsored by the new colony’s gentry, the Macarthur family.At Southampton, they joined the sailing vessel, the Brothers for the long, dangerous journey across the world. There were the hazards of sickness, boredom and potential shipwreck. They had to cross the English Channel, the stormy Bay of Biscay, the breathless heat of the Topics and the cold, stormy conditions of the southern latitudes. During one of the worst storms, a prize stallion was swept overboard. On the vessel, Frances set up a school for the 21 children who were on-board. She was subsequently mentioned in British Parliamentary Papers.

The woman (Frances Weeks) who conducted the school aboard the Brothers was remunerated for her trouble by Mr Macarther with a gratuity of five pounds.’ (Testimony of Robert Towns, command of the Brothers.)

By the time they had reached Sydney in April 1837, Frances had taught her husband to both read and write. Like other women on board, Frances made up clothing from the material supplied and was paid for the work. When she reached New South Wales, she was allowed to keep some of the clothes. Most difficult problem for the immigrants was the sense of isolation from relatives back home. She wrote letters to relatives in Stourpaine, Durweston and Sixpenny Handley. However, as the sea journey took around five months it would take nearly a year to receive a reply. Frances would write about the plentiful food and of a better life living like ‘little gentle folk.’ It was not long before other members of the Jeans family started to arrive in New South Wales.

Despite her accredited teaching on the long voyage, the Macarthurs chose a convict, Josiah Turner as their first local teacher paying him an annual salary of five pounds. He had been transported for sending a threatening letter to a farmer. In Australia, in the 1830s, Frances would have been overlooked for the role because she was a woman. Reflecting on their improved circumstances, Frances and Benjamin had their photographs taken involving a new photographic technology known as tintype. Both are well-dressed in the photographs in a manner that would have been unaffordable back in Dorset. Together they brought up ten children. In time, Benjamin Weeks became a major land owner.

Eighteen forty-four, saw an unexpected reunion with Frances’ errant father-in-law, John. At the age of 69, he had just completed seven years’ hard labour in Van Diemen’s Land (Tasmania) after being transported from England for stealing wheat. Later, Frances and Benjamin moved to Burrowa State where she opened a school. It was there that Frances Weeks died at the age of 71, a long way from Stourpaine & Durweston.