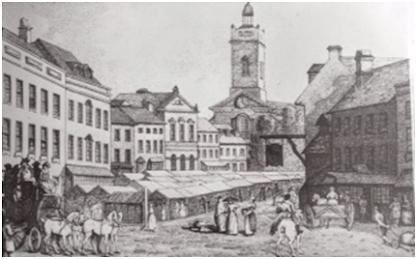 In 1759, John Ayliffe, who had a house built in East Street, was executed for forgery at Tyburn in London.

In 1761, the Court of Records in London threatened to fine Blandford forty shillings (£2) if the pillory, sixty shillings (£3) if the stocks and five pounds if the pound were not all immediately put into good repair.

In 1762, highwayman John Poulter, with five companions, stole items of gold and silver from the Crown Hotel which they took onto London.

In 1766, a ticket on the horse drawn ‘Blandford Flying Machine’ cost twenty-five shillings (£1.25p) and it took two days to travel from Blandford to London.

In 1769, fines were imposed on a number of Blandford householders for throwing filth into the streets.

In 1770, a cockfighting contest was held between the gentlemen of Dorset and Wiltshire in the Red Lion Inn.

In 1771, the Sergeant at Arms and the Clerk were both paid six pence (2.5p) for putting up notices in Blandford warning against throwing fireworks.

In 1776, clockmaker, Henry Ward was born in Blandford. Arguably, he was the finest horologist the County of Dorset has ever produced.