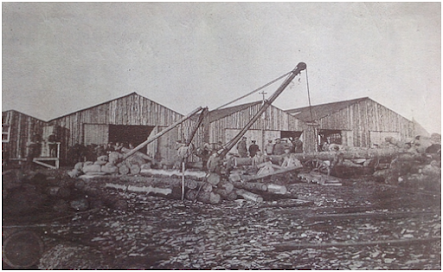 During World War I, there was a German Prisoner of War Camp on the Blandford Milldown which opened in June 1917. It held nearly 200 internees who were accommodated initially in three huts and 30 large bell tents. Each tent was lit by lamps but there was no heating. The kitchen was in a shed and tobacco could be purchased from a canteen. As there was no infirmary, all sickness cases were sent to Blandford Camp.

There was considerable ill-feeling towards German people at the time and that was often reflected, and frequently encouraged, by newspaper reports. The Weekly Despatch of 6 January 1918 reported that ‘the good people of Blandford are much incensed at what they consider to be undue pampering of a number of German prisoners interned there.’ Apparently, the townspeople were surprised to see at Christmas ‘batches of their grey clad guests’ entering any shop they pleased and buying what they wished – even tea ‘by the pound’ as one indignant housewife complained. However, it was explained that under military law, prisoners who have money, could buy anything they required from shops provided they were under escort. Also, under military law, prisoners were not allowed to work on Sundays. So during a heavy fall of winter snow British troops had to clear the snow on the rest day. As the Weekly Despatch commented ‘the Germans sat over their fires reading, playing leap frog or watched Tommy striving with broom and shovel.’

In May 1918, a local baker was summonsed for supplying bread to German prisoners. One of the greatest difficulties German prisoners had when escaping was obtaining food. The prisoners were found in possession of six loaves bought from the baker. Despite being ‘of good character’, the baker was sent to Dorchester Jail for six weeks and fined £25. His subsequent appeal against the sentence was dismissed.

Just after the Armistice in 1918, Blandford Council instructed the Town Surveyor to hire six German prisoners of war to clear mud from Blandford’s streets which were described as a ‘disgrace’. While about the same time, there was a report of a soldier being reprimanded for having his hands in his pockets and allowing a German prisoner to carry his rifle for him.

By March 1919, there were around 270 internees on the Milldown, mainly employed in a large saw mill located in the middle of the Camp. Around it were wooden huts including ten dormitories easily capable of accommodating 30 men. Each had a stove but lighting was part oil lamps and part electricity. Quarters were ‘comfortable but roughly built.’ Thirty six horses dragged huge logs into the saw mill which made it a busy site.  A small railway siding was built about a half a mile north of Blandford station for the use of the Camp.

By November 1919, the British War Office reported that 20,453 German and 129 Austrian prisoners had been repatriated to their home countries with only around 200 left working in agriculture.