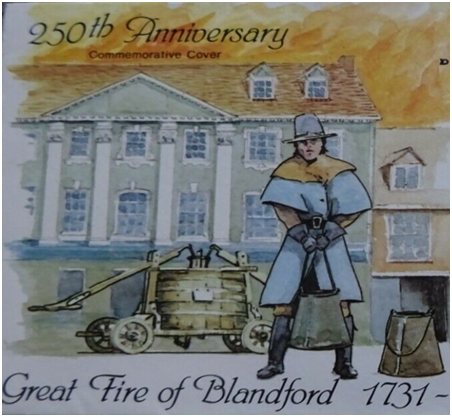 In 1731, the Great Fire of Blandford destroyed the greater part of the town. It started at about 2 o’clock in a soap boiler’s house. Only forty out of around five hundred houses escaped the fire. To add to the troubles, the town was suffering from a smallpox outbreak affecting around 150 people.

The practice of ducking ‘incorrigible shrews and scolds’ was discontinued with the burning of the town’s ducking stool in the fire.

In 1733, there were thirty inns in Blandford.Composer William Knapp wrote an anthem in commemoration of the 1731 Great Fire of Blandford.

In 1735, Blandford Church was constructed at the cost of £3,200 and it cost four years to complete.

In 1738, because of the number of disorders in the town, the bailiff, vicar and 22 leading residents petitioned the magistrates to grant licenses to only 20 local innkeepers.

In 1739, one shilling & sixpence (7p) was paid by the Overseers of the Poor for curing John Pottle’s wife of the itch.